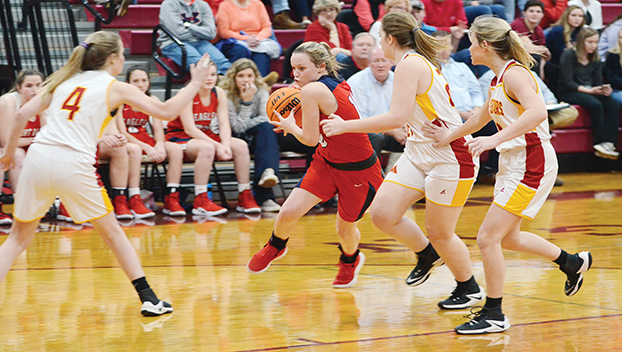 VanDyke led the varsity team with 19 points and nine rebounds, had five blocked shots and stole the ball twice, while Acreman followed closely with 15 points, led the team with seven assists and had three rebounds and three steals.

The victory guaranteed FDA a first-round bye in the Alabama Independent School Association’s (AISA) Class AAA State Tournament as the Region 2,
Area 2, champs. The Lady Eagles will play at noon on Feb. 12, in Round 2 of the tournament at the Multiplex at Cramton Bowl in Montgomery.

The junior varsity girls (12-1) had more of a problem fending off the Lady Senators, winning by seven points, 42-35.

Freshman forward Eden Skipper led the team in rebounds with nine and also scored five points and recorded two steals and a block. Freshman guard Caroline Hartley had one basket and two rebounds.

The junior varsity girls will participate in the AISA Class AAA JV State Tournament this Saturday at Morgan Academy. The No. 2-seeded Lady Eagles will take on seventh-seeded Glenwood Academy at 8 a.m. in the first round. With a victory, the defending state champions would take on the winner of the Lee-Scott vs. Morgan contest at 1 p.m.

Heading into the weekend, head coach Regina Parker is optimistic.

“I am looking forward to watching the girls play together,” she said. “Lily has led our team this season  and Annah Parker has stepped up her offense. Anna Claire leads the team on defense, while Eden is our leading rebounder. I believe we have a chance to reach our goal of back-to-back state championships.”

The championship game will tipoff at 5 p.m.

The night before, Fort Dale’s girls’ teams were also in action on the road in Selma, defeating Meadowview Christian, 45-26 and 32-6, respectively.

In the 19-point varsity win, Acreman showed out with a game-leading 15 points, nine rebounds and eight steals, while VanDyke chipped in with 13 points, five rebounds, two steals and four blocks.

Pickens also finished the game in double figures with 10 points, including a perfect 4-for-4 at the free throw line. Royal added four points, seven rebounds and a block and Emily Hartley had three points, four rebounds and six steals.

All 16 players on the JV Eagles’ active roster saw playing time with 11 scoring at least one point in the team’s lopsided victory.

On Jan. 10, Morgan Academy visited Greenville as both the varsity and junior varsity Lady Eagles sent the Lady Senators home with losses. Fort Dale’s varsity girls defeated Morgan 59-46 following a 10-point victory, 37-27, by their younger counterparts, in a contest that featured 64 total fouls.

Acreman shot 58.3 percent from the floor to lead the varsity girls in scoring with 23 points. VanDyke wasn’t far behind with 18 points, while Royal chipped in with 13 points. Acreman and Royal both pulled down eight rebounds and VanDyke had six. Acreman’s seven assists also led the team and VanDyke’s seven blocks led the way.

Junior forward Shelby Lawrence finished the game with three points. Pickens (four rebounds) and Woodard, a sophomore guard, each had one point.

Little paced the JV Lady Eagles’ offense with 11 points, including three goals from behind the arch. VanDyke scored eight points in the win, while snagging a game-leading 11 rebounds and three blocked shots. Thomas chipped in with six points, four rebounds and six steals and Skipper had 10 rebounds and scored five points.

Also scoring for FDA were Long (seven rebounds) with three points and Maire Scott and McNaughton with two points apiece.

VanDyke’s 12 points and Acreman’s 10 points were not enough to overcome a visit to Pike Liberal Arts School on Jan. 7, as the Fort Dale varsity girls fell 42-33 to the home team.

Thomas’ last-second layup gave the JV girls a one-point, 28-27, victory over Pike earlier in the day. She finished the game with three points, four rebounds and three steals.

The B-team girls also picked up a big win over Pike, shutting out the young Lady Trojans, 18-0.

The JV and varsity girls will be in action Friday night at home as the teams host Monroe Academy Friday. Games begin at 4 p.m.

Monday was a day to both remember history and to make it in the Camellia City. Hundreds braved the beautiful,... read more