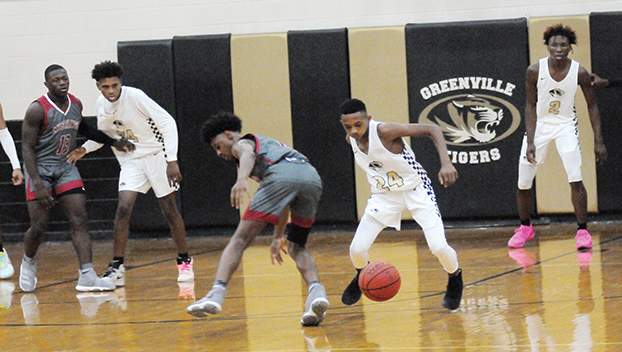 “We have been playing OK,” Mickles said. “We still have a lot to work on. We have high expectations and one-point victories are not good enough.”

On Jan. 14, the Tigers traveled to Charles Henderson and stole a victory with a last-second shot, 62-61. Kevin Brown lead the way in scoring with 15 points.

Following the nail-biting victory the team faced off against Central-Hayneville on Jan. 16. In yet another heart-stopping contest the Tigers once again were victorious. The scoreboard read 88-86, as junior Justice Palmer sank three free throws in a row to seal the deal. Tyler Mallory led the team with 29 points.

A convincing 25-point win against Rehobeth, led by Jadakiss Anderson’s 14 points, last Friday night is more up to Greenville standards.

This Friday night, the Tigers face off against region leader Carroll of Ozark, which earlier this season the Tigers lost a heart breaker to, 69-66.

“We played sloppy last times, we got out rebounded, had way too many turnovers and we were missing two starters,” Mickles said. “With Kevin Brown and Dawson Sarblah back in the line-up, along with crashing the boards and taking care of the ball, we should be in good shape.”

If the Tigers are able to beat Carroll Friday night, then the region will end in a tie. If this is the case, a coin will be flipped to see which team finishes first in the region, and more importantly, who hosts the region tournament.