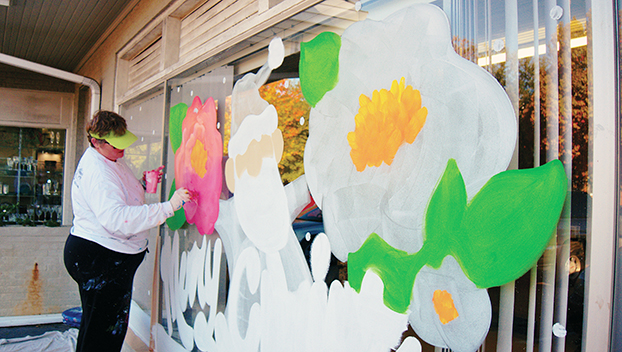 She’s become a familiar sight of late in Downtown Greenville, her gloved hands and comfy clothes streaked with a rainbow of colors from the paints and brushes that are the tools of her trade.

Muralist Michelle Black has been busy transforming a section of Commerce Street downtown into a winsome winter wonderland.

Black, the Georgiana-based artist behind the company A Color Affair, has partnered with Tracy Salter and the Greenville Area Chamber of Commerce to bring this year’s Christmas parade theme, “A Camellia City Christmas” to vivid life on the front windows of more than two dozen (and counting) offices and businesses along the 2019 parade route.

A San Antonio native who moved to Duluth, Ga., as a teen, Black ended up as a resident of metro Atlanta for 30 years.

She and husband Danny have since switched gears and traded the busy big city for small town life.

“Danny was offered the manager position at Farmers Home Furniture here in Greenville, and it was just a great opportunity for both of us,” Black said.

A self-taught painter (“I’ve never had any formal training, but I do have plenty of experience as an artist”) Black says she has loved drawing and sketching for as long as she can remember.

It was a painting she did in her son’s room in the couple’s first home that so impressed husband Danny he insisted on taking photos to post online “just to see if anyone would let me painting something for them.”

The very first call she received was from Zoo Atlanta, who wanted a mural for their gift shop. That mural, painted in the summer of 2008, was Black’s first professional job and the beginning of her company, A Color Affair.

“I was able to take a hobby that I loved and turn it into a business,” Black said. “I’ve been painting murals for over 11 years now, and I love every minute of it. My family has been my biggest inspiration and cheerleaders, not to mention my assistants when I need their help.”

Projects that are personal favorites for the artist include a mural in Monroe, Ga., that is an impressive 80 feet wide and 16 feet tall and a series of murals done for Trinity Prep School in Loganville, Ga., a unique school with a strong emphasis on nature and wildlife.

After getting somewhat settled into their new home in Georgiana, Black placed an ad on Facebook Marketplace, seeking a new window or wall mural project.

And that’s where GACoC director Tracy Salter came into the picture.

“I saw her ad, contacted Michelle and shared the vision I had for our community this Christmas,” explained Salter.

“I envision downtown Greenville as a place kids and adults, locals and visitors alike, all want to come and stroll up and down the street and look at all the fun, colorful, inspiring window displays, the beautiful Christmas lights, decorations and all the other festive additions to our city scape, created by the city’s own Jennifer Stringer and team. A place right out of a Hallmark movie that you want to explore, go shopping, have a meal and make great memories with family and friends.”

In designing the windows, Black had the challenge of working the parade theme, “A Camellia City Christmas,” into each and every window. And so, along with smiling Santas, elves, reindeer and snowmen, there are a bevy of beautiful camellias in a variety of colors also gracing every window painted by Black.

She has even been able to further customize some of the windows. Felines and canines were worked into the Greenville Animal Shelter’s front windows, and the front of McFerrin’s Jewelry features a depiction of the Nativity story.

“I requested the real ‘reason for the season,’ and this is just fabulous. She is doing a wonderful job,” said Susan McFerrin Foster.

“Michelle is extremely talented and she’s done everything in such a first class manner: from visiting personally with each of the participating businesses on their design preference, to providing a detailed design proof for advance approval, to drawing all the designs free-handed. It’s been such a pleasure working with her on this project,” Salter said.

Those visits with local businesses proved a positive experience for Black.

“It was actually quite nice getting to know the people of Greenville and hearing the pride they have in their own town,” she said.

With Black being new to the community and a one-woman operation, the focus had to be limited to just one area of town this year, Salter said.

“While we chose to focus on the Christmas Parade route for the first year, the response and desire to participate has been so enthusiastic that the goal for next year is to start super early—and include the entire city for Christmas 2020,” Salter concluded.

And muralist Michelle Black, who is on target to complete all the windows by the end of the week, says she is up for the challenge.

“It’s not just the projects themselves that I love about my work; it’s the people I get to meet and the friendships built,” she said. “The response I get from people as they see more of the windows has been amazing and gratifying. I am looking forward to expanding it all next year.”

Salter requests anyone who did not participate in this year’s window mural project and who is interested in being a part of next year’s project to go head and contact the chamber for details at 382-3251.