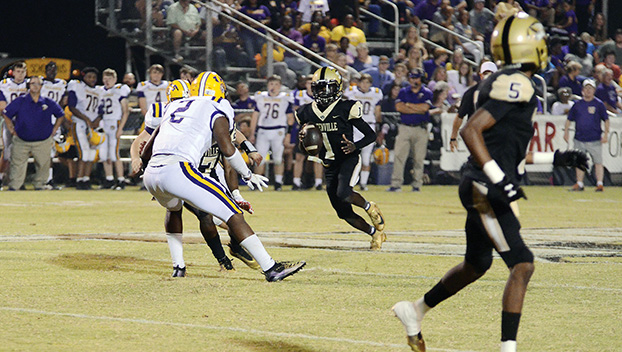 Greenville High School sophomore quarterback Crishon Crenshaw eyes senior receiver Quin McNeil down field against Tallassee at home earlier this season. The Tigers will host undefeated Bibb County this Friday night in the second round of the Class 5A playoffs. | Photo by Adam Prestridge

The 7 p.m. contest will prove to be a true test for the Tigers, according to GHS head coach Josh McLendon.

“It’s going to be tough, they are good football team,” he said. “They are coming in here undefeated, so we’re going to have to play well. We’re excited for the opportunity and are happy to be where we are. We’ve had a great season and want to see how it plays out Friday night and see what we can do.”

McLendon added that Bibb County is fundamentally sound on both sides of the football, which will be the Tigers’ biggest hurdle Friday night.

“They are really good,” he said. “They are not real flashy, they’re just really, really good at what they do. Their offense is all centered around their running back. He’s a really good player and runs really, really hard, so we’ve got to try to slow him down. Defensively, they do a good job of keeping everything in front of them, making tackles and getting lined up right; nothing flashing on either side of the ball. They are just a sound food ball team.”

Last Friday night, Greenville led Citronelle 9-6 at the half before pulling away for the victory in the second half.

“We played well; it’s good to go on the road in the playoffs and get a victory,” McLendon said. “We did what we needed to do offensively, that’s sort of been our game plan all year, and defensively, they did what they’ve been doing. I thought we played well and handled the night in a good way. It was cold and I thought we dealt with that better than we did the previous week. It was a good night.”

McLendon believes the Tigers’ scoring ability made the difference in the game.

“The interception return for a touchdown was huge,” he concluded. “Any time a defense puts points on the board, that’s huge for us as a team. We had a special teams touchdown also. Any time you can score in all three phases of the game, it should be a good night. The defense played outstanding as well and the offense had enough plays and made some plays to keep the clock running and get some first downs. It’s OK to punt sometimes and play the field position game and I thought we did that well in the first half. Our defense, we are going to put it on them. They did a good job of making plays and going from there. It was a good night.”