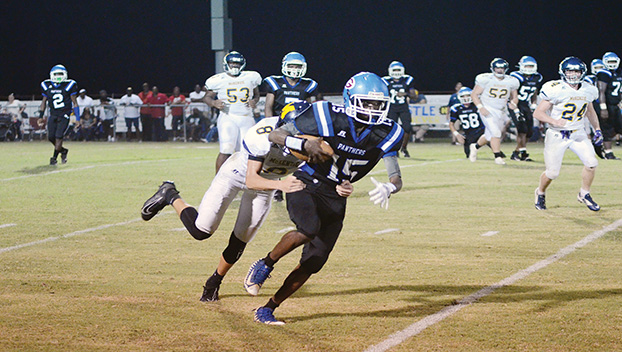 It was a closer game than the score indicated as powerhouse Brantley rolled over Georgiana 61-28 last Friday.

“They’re a tough football team and they were Friday night, but we didn’t necessarily help ourselves either,” Georgiana head coach Ezell Powell said. “We gave them two kickoff returns for a touchdown and two interceptions were run back for touchdowns. We eliminate those mistakes and we win the ballgame.”

Powell said the Panthers’ offense performed well against the Bulldogs.

“We struggled a little early,” he said. “We settled down, but before we knew it, we were down 21-0, and we settled down and mounted a drive together. It stalled when they held us on fourth down, but we made them turn it over and got it back. We continued to drive. We saw some things that were working for us and we kept it going. We got the ball in the end zone. From that point on, we made some drives and kids made plays. We were able to get ourselves back in the ballgame.”

During the third quarter Brantley held a slim 34-28 lead over the Panthers.

“We had it right where we wanted it and the turnovers and the kickoff returns ran it up,” Powell said. “They ended up pulling away from us and winning. We expended a lot trying to maintain it. The lack of depth sort of showed up. We ran out of gas and weren’t able to finish it like we wanted to.”

Quarterback Azenda Pennington scored the first touchdown, according to Powell, and Quentin Hamilton scored on a long run in the second half.

“We had a couple of touchdown passes thrown,” Powell said. “Pennington got hurt in the third quarter and Hamilton came in as the backup. He helped lead the charge for us to get back in the ballgame. He played a huge role for us to stay in the game. The guys know that if our quarterback goes down again, we have someone who can come in and help out.

Georgiana returns home this Friday, but faces another tough challenge.

“We’ve got Goshen,” Powell concluded. “They are always a tough one. If we can play the way we’re capable of and not turn the ball over or give up plays like we did against Brantley, we should be OK.”