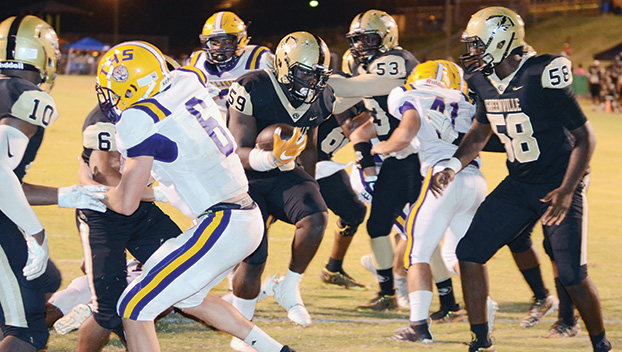 Greenville 6-foot, 290-pound lineman Jamar Jackson bulls his way into the end zone against Tallassee last Friday night at Tiger Stadium. The Tigers picked up a 33-7 victory in their first Class 5A, Region 2, game of the season. | Photo by Adam Prestridge

Trailing 13-7 at halftime following sophomore running back Zavion Carr’s 64-yard touchdown scamper with 6:00 left in the half, it appeared the Tallassee Tigers had momentum on their side.

However, what proved to be a defensive struggle in the first half, turned into a highlight reel for Greenville (2-1, 1-0) in the second half as the home Tigers ran away with a 33-7 Class 5A, Region 2, victory last Friday night.

“That’s what we are; we’re a defensive team,” he said. “Greenville is always going to play defense. They set the tone for us in the second half and got us to where we needed to be. Anytime you can get scores on defense, that loosens everything up. When your defense gives you 14 points, that’s huge.”

Following a scoreless first quarter, Greenville drew first blood when freshman defensive back Jonathon Purifoy snagged an interception and raced 52 yards for the touchdown with 8:59 left to play until halftime. The extra-point kick was no good, giving the home team a 6-0 lead.

Less than three minutes later, junior running back Kirsten Hawthorne showed off his speed by taking a handoff 61 yards for the touchdown. The PAT put Greenville on top, 13-0.

Carr returned the favor on the next drive scoring on his long run. Clay Johnson’s extra-point kick cut into Greenville’s lead 13-7, but that would be the only scoring the visitors would manage in the game.

Greenville went on to score three touchdowns in the second half – two in the third quarter and one in the fourth. The hosting Tigers scored on a 1-yard run by 6-foot, 290-pounder Jamar Jackson, who also added the two-point conversion, and a 78-yard interception return by senior defensive back Jalen Collins. In the fourth, GHS scored on a 40-yard dash into the end zone by sophomore running back Jermaine Abner.

“We got rolling in the second half; we committed to running the football in the second half,” McLendon said. “We felt like if we just played our game, we would be fine. That was the big thing, we just wanted to run the football. I’m proud of our guys for responding, they took it and drove it right down the field.”

Despite the loss, Tallassee head coach Mike Battle believes his Tigers (1-2, 0-1) had some bright spots against Greenville, which lost to Vigor in the state semifinals last season.

“We played good in spurts,” he said. “I thought that we played a good first half. They scored one touchdown on our defense and then we were unfortunate to throw two interceptions for touchdowns, which you can’t do. We turned the ball over four or five times, and I don’t care who you play, if you turn it over four or five times, you’re going to get beat. Now, you throw in a really good, athletic team like that, you’re going to get beat bad.”

Friday night, THS started six sophomores and a freshman quarterback, according to Battles.

“They are getting better each week, they make mistakes – we knew they were going to – and that’s just something you’re going to deal with, but hopefully down the line, we’ll cut those mistakes down and they start having some success,” Battles concluded.

Greenville hits the road Friday to take on Valley in another region contest. McLendon said his Tigers need to continue improving from week-to-week.

“It’s a tough place to play and it’s another region game,” McLendon said. “Anytime that you travel and go on the road, it’s always a challenge. We’ve got to correct our mistakes and not be satisfied and understand that we’ve got to continue to work; we’re not where we want to be right now.”

Greenville band to march for McKenzie