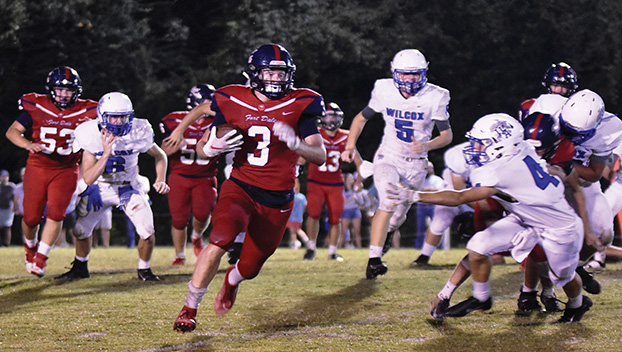 Sophomore running back Jacob Foster speeds around the corner for some of his 184 yards rushing and two touchdowns last Friday night at home against Wilcox. He also caught a 47-yard TD pass. | Photo by Kathy Pickens

Fort Dale Academy racked up 406 yards of total offense last Friday, but still wound up on the losing end of its game with Wilcox Academy, 55-27.

Wilcox Academy ran 68 plays to Fort Dale’s 31, but the Eagles still amassed 257 rushing yards and 199 yards through the air in the home loss.

Fort Dale Academy was led offensively by quarterback Rob Merritt, who was 3-of-6 passing for 149 yards, including an 80-yard touchdown pass to Brice Acreman and a 47-yard touchdown pass to Jacob Foster. Acreman also caught another pass for 32 yards. Foster was also stellar on the ground with 184 yards and two touchdowns on nine carries. He had touchdown runs of 83 and 67 yards.

Defensively, Fort Dale was led by Caden Coker with 16 tackles and Nate Richardson, who had nine tackles and an interception.

Wilcox Academy had 509 yards on the ground and 59 through the air.