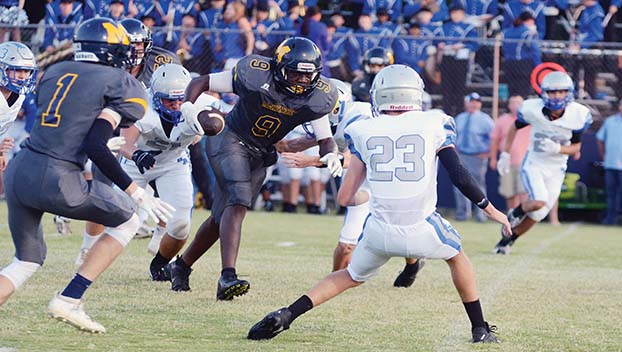 The McKenzie Tigers returned the opening kickoff 84 yards last Friday night in Red Level and capitalized on a turnover on their first defensive drive and never looked back, defeating Red Level 32-22 in a Class 1A, Region 2, opener.

“We played decent,” the Tigers’ head coach Tony Norris said. “There were some things that we didn’t do that well that got us in trouble a little bit, but I thought the kids played really hard.”

Junior Adarius Davison raced nearly the length of the football field on the opening kickoff to give McKenzie a 7-0 lead following Sebastian Vazquez’s extra-point kick. Recovering a fumble on Red Level’s first drive, the Tigers took advantage when sophomore quarterback Jakarrie McPherson danced his way into the end zone from 25 yards out. The kick was no good, giving the visitors an early 13-0 lead.

“We jumped out on them pretty early,” Norris said. “We didn’t turn the ball over, we held on to the ball. That’s one thing I’m proud of the kids for; our ability to secure the ball. That was a big ad-vantage for us.”

Red Level answered back with a touchdown of its own to cut into McKenzie’s lead, however, the Tigers’ sophomore receiver Zanderion Cook connected with McPherson on a 16-yard pass for a touchdown and McPherson later bulled his way into the end zone from 3 yards out to pad their lead. The two-point conversion failed and the kick was no good, but McKenzie led 25-7 at the half.

In the second half, Red Level inched to within 10 points, scoring on a 10-yard run and converting the two-point conversion, but it was McPherson once again putting the game out of reach on a 38-yard run. Red Level scored late on a 2-yard run, but it proved not to be enough.

McKenzie travels again this week for another Region 2 contest against cross-county rival Georgiana.

“It’s Georgiana, but it’s no different than any other game we play,” Norris said. “Don’t make it anything more than it is.”

Norris concluded by saying that fundamentals such as tackling and securing the football would be the difference in the contest.

Kickoff in Georgiana is at 7 p.m.