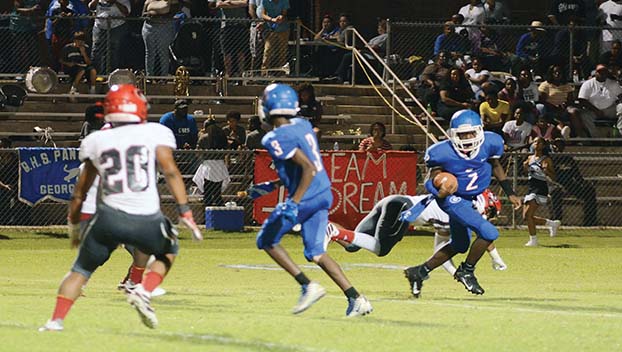 Georgiana’s Panthers had a tough night on the football field last Friday, dropping the game at Florala 30-20. However, head coach Ezell Powell said his team can’t dwell on the defeat as they are focused on facing rival McKenzie this Friday night.

Powell said his team struggled at times at Florala.

“We had several distractions, but that’s not an excuse – we just didn’t play well,” he said. “They deserved to win because they outplayed us.”

However, the Panthers’ offense shined in spots, scoring 20 points against the host Wildcats.

“Cleandre Walker scored the first one on a screen pass,” Powell said. “He broke a tackle and went the distance. Quentin Hamilton had a long receiving catch that got us down to about the 1-yard line and then Azenda Pennington took it in from there. On the third score, Hamilton caught a wheel route and took it for about 80 yards for a touchdown; he had a good night for us. He caught two balls for us that put us in position and really kept us in the ballgame. We just couldn’t finish it.”

On the defensive side, Powell said he and the coaching staff were going back to work this week with the team.

“We just didn’t tackle well,” he said. “We didn’t tackle well at all. That is one of the emphasis this week is making sure that we fundamentally are sound. It’s something we can’t just put on the kids. We went back and reevaluated us and what was important and what is important to us going forward and what some of the things we need to do right are – and tackling was one of them. We need to work on running to the football and just sort of go from there.”

This week, the Panthers are busily preparing to host McKenzie.

“It’s a rivalry game we want to win,” Powell said. “For us, a win would mean just getting back on track. We’re trying to get a win. McKenzie is doing well right now. They’ve won last week and I know they want to continue to do well, and they would like nothing more than to beat us this year; both teams need a win. A win for them would be great to keep the momentum going and a win for us would help to get us back on the winning track.”

Powell said the schedule is difficult from here on out.

“Once we get through that one and all the emotions and hype, you turn around and have Brantley,” he concluded. “We have Goshen and Elba. We’ve got our hands full. This week, we’ve just been focused on McKenzie and making sure we’re doing as coaches, the best job of putting these young men in the position to be successful.”