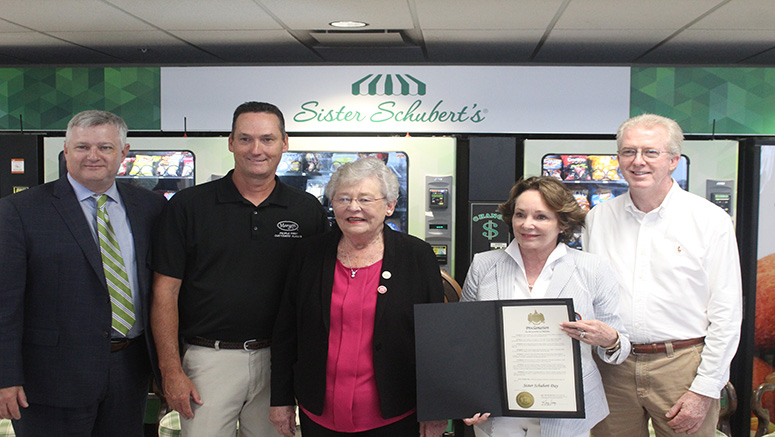 Sister Schubert’s Luverne manufacturing plant, which supplies over 200 jobs to Crenshaw County, received a visit from Alabama Governor Kay Ivey and members of her staff on Monday.

Ivey- after removing jewelry and donning a hair net and baker’s coat- was given a tour of the facility by several of the plant’s managers and Patricia “Sister Schubert” Barnes herself.

District 90 Rep. Chris Sells and District 25 Sen. Will Barfoot accompanied Ivey on the tour, during which plant managers and Barnes explained the process by which the company’s dinner rolls and other products are assembled, baked and made ready to ship.

Following the tour, Barnes introduced Gov. Ivey to a group of employees in the facility’s break room.

“She’s going around [the state] because this is our Bicentennial year. She is here to talk about how wonderful that is and all the things that will be going on this year,” Barnes explained, before detailing Gov. Ivey’s background and ascent to the governorship.

Gov. Ivey then took the podium to speak and went on to reveal a proclamation declaring August 26 “Sister Schubert’s Day” in Alabama.

“As I travel this state, I’m reminded that our great state what built by people who are innovative and hard-working,” Ivey said.

“[Barnes] is someone who took her family heritage, and her love of cooking, and spread it across this nation. We’re proud of Sister and the great team she has here,” the Governor concluded.

Barnes, a Troy native, famously used her grandmother’s dinner roll recipe to start her business after selling out quickly at a bake sale for the St. Mark’s Episcopal Church in her hometown.