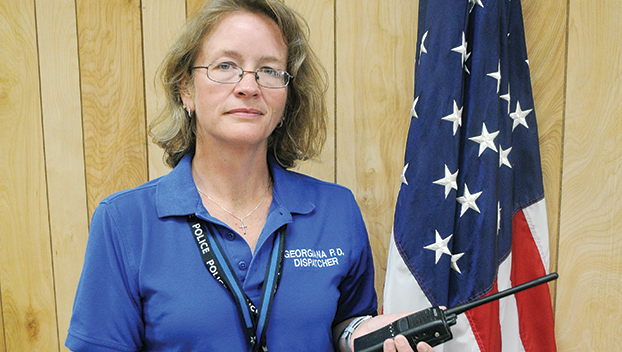 Sgt. Mary Salter was recently honored as the Georgiana Police Department’s Dispatcher of the Year. | Photo by Mark Rogers

At last week’s Georgiana council meeting, Sgt. Mary Salter was surprised when Police Chief Carlton Cook awarded her with the Dispatcher of the Year Award.

Cook said Salter “displays professionalism, promptness and a great desire to service the citizens of Georgiana and all law enforcement personnel with her great work ethic.”

Salter said she thought something might be up when asked to attend the council meeting, but the award caught her a little off guard.

“Undoubtedly my husband knew, my daddy told him, but they decided not to tell me,” she said. “They told me I just had to be there.”

Salter began dispatching in Georgiana in 2003 and has enjoyed her service to the community and hopes to continue.

“I was a fill-in, part-time dispatcher and was a reserve police officer,” she said. “I loved doing that. Two years later, a fulltime position came open in dispatch and I’ve been here ever since.”

“I love interacting with people,” she said. “I enjoy working with the officers. We get a lot of people that call and I talk to them and it feels good to help. I like to make sure our guys are safe.”

Dispatching involves hours that for some would not be considered normal.

“I work every weekend, mostly day shift,” Salter said. “We dispatch the fire department, ambulance and the police department. My job is a little more than the others; I have to deal with a lot of their paperwork. I make sure everything is working right for the officers – their equipment and cameras and things.”

Salter grew up in Georgiana and now lives in Evergreen with her husband, John, who is in law enforcement.

“He worked in Greenville for a few years and worked here for about 14 years, and he has been with Evergreen for about four years,” she said. “We’re a law enforcement family. He is a corporal in Evergreen and the police chief in Castleberry — part-time job.”

“I grew up with my dad being police chief here (James Blackmon),” she said. “He was here for 42 years with the police department. My mother and my sister were both paramedics.”

“I actually want to go to the police academy to get certified,” she concluded. “I’m going to have to wait until my four year old is a little older. I know what happens on both sides. I would like to be there, so that’s my goal.”