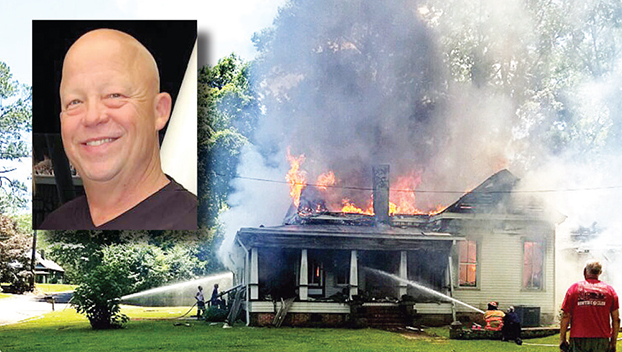 This home located on Jane Street in Georgiana was completely gutted by a large fire last Wednesday afternoon. A Tennessee firefighter spotted the fire and offered assistance. | Photo Courtesy of Butler County EMA

A firefighter traveling back from vacation spotted and helped extinguish a fire in Georgiana last week.

Elwood Ervin of Cookeville, Tenn., saw smoke from a home located at 309 Jane St. shortly before 1 p.m. last Wednesday and jumped into action.

“We were returning to Tennessee from Panama City,” he said. “We had just stopped at the Fuel Mart and went to drive through Georgiana.  We were coming off the highway where the signs says to go for the Hank Williams Museum. My wife and I looked at each other and said, ‘smoke showing.’”

Ervin, who has been in firefighting for 42 years and is a former fire chief, said he knew what he had to do next. He currently serves as a paid on-call driver/engineer for the Putnam County Fire Department, so he sprang into action.

“My wife thought the smoke might be from a brush pile, but  I recognized that it was a house,” Ervin said. “I dialed 911 and they told me it had been reported and the fire department was on the way. I got out and did a quick 360 as smoke was pouring from the home. I asked the neighbor if anyone was home and he said the woman had just left. A police officer arrived on the scene and I asked him if he knew of any people or pets inside.”

Ervin described the fire in terms that he and other firefighters might use when arriving on a scene, “It was a nice juicy one.”

The firefighter and State Farm Insurance agent said he was glad to assist.

“I always carry my turnout gear in my car,” Ervin said. “I asked if they needed help and was told they would appreciate an extra hand. I put my gear on and helped out. There wasn’t much we could do. I hate that for the lady.”

Georgiana Fire Chief Alvin Dantzler said Tuesday that the department was unable to save the structure, as it had been burning for a while before it was noticed.

“It was totally destroyed,” he said.