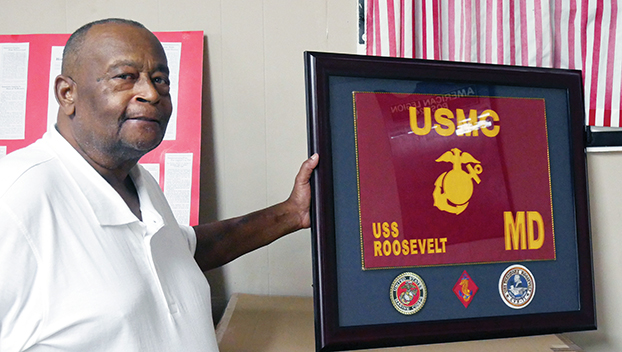 Master Sergeant Rich Lewis poses with a special gift from his fellow Marines to celebrate the 30th anniversary of his retirement from the U.S.S. Theodore Roosevelt and the USMC. | Photo by Angie Long

On May 18, the Marines landed in Greenville. They came from the West Coast, the East Coast, from Michigan and Florida, via plane, car, truck and motorcycle. They gathered at the local VFW Hall to celebrate a Greenville resident who made a lasting impact on their young lives in just a few short years.

Master Sergeant Rich “Top” Lewis, USMC (ret.), was the non-commissioned officer (NCO) in charge of the Marines serving aboard the U.S.S. Theodore Roosevelt. This nuclear-powered Naval aircraft carrier was the newest one in the fleet during Lewis’ time of service on board, from its construction in 1986 until his retirement from the military in 1989. His time of service on the carrier took him around the world, from the North Atlantic to the Mediterranean and the Caribbean.

The 72 Marines in the detachment aboard the Roosevelt were in charge of security aboard the carrier with its crew of 5,000 seamen and powerful nuclear weaponry. And Lewis and his fellow senior NCO, Sergeant Major Thomas Chavis, were the men in charge of those Marines.

“It was a considerable responsibility on our shoulders,” Chavis recalled. “With it being such a large nuclear vessel, the Marines had to take extra care with everyone coming on board and leaving the ship. There was daily training to secure that ship in the event of any possible threat.”

However, their duties weren’t limited to the Theodore Roosevelt’s security.

“We were also there to be a quick strike landing force in case of insurgencies anywhere,” Lewis explained. “We could go ashore and hold it until the main forces arrived.”

Although these men were serving during peace time as “the last of the Cold Warriors,” Lewis said he always focused on ensuring his men were fully prepared for any mission they might be called upon to undertake.

“My troops were always combat ready, so that if the President ordered it, we could go in and do the job,” Lewis said. “I personally made sure they were properly trained because I had the actual combat experience from my two tours of duty in Vietnam.”

On one occasion, those Marines aboard the U.S.S. Roosevelt nearly had their combat readiness put to the test.

Master Sergeant Daryl Johnson, USMC (ret.), who was then a young sergeant serving under Lewis, vividly recalls one incident.

“We were put on alert one day while at sea and told to go to the magazine, get our weapons and be ready to hit the beach — I can’t say where it was, of course,” Johnson said. “We were armed, the helicopters were all fired up and we were literally about to board them when we were told to stand down. I tell you, my heart was pounding like never before, because that would have been our first combat mission.”

Johnson shook his head and smiled.

“I thank God that we didn’t have to go, but I am also thankful for Rich and the fact he made sure we were ready,” he said. “We all knew exactly what we would have had to do if we had gone, and we felt sure everyone would have come back safely, too.”

Johnson, one of three guard chiefs on board whose troops assisted in guarding the Roosevelt’s nuclear weapons, only served on the carrier for two of Lewis’ three years onboard — two years of 25 he spent in the USMC.

“And yet, being on that ship was probably the biggest highlight of my career,” Johnson said. “Those two years with ‘Top’ were the most impactful I spent.”

The master sergeant was more than a commanding officer, Johnson said. He was also a mentor, teacher and father figure to the younger men serving under him.

“He not only trained us, he made sure we stayed out of trouble,” he said. “‘Top’ wanted to make sure we weren’t just good Marines, but good citizens. And that wherever we went in the world, we represented only the Marines well, but our country, too.”

As the 30th anniversary of his retirement approached, the men who served with “Top” aboard the Roosevelt wanted to celebrate the occasion. However, due to Lewis’ chronic health issues, he cannot travel far from home.

“And these guys said they would come to me,” Lewis said with a grin. “It gives my heart joy to know they would come from thousands of miles away to this little bitty town some of them couldn’t even find on GPS until I gave them some reference points.”

Both Chavis and Johnson said they didn’t have to think twice about coming to celebrate with “Top” in his little hometown.

“Not only was Rich Lewis my training partner, he is one of my best friends,” Chavis, a Marine retiree who traveled from Jacksonville, N.C., for the celebration, said. “There is hardly a better person I know than Rich. So, I was happy to drive down here to be with him and the men tonight. It’s really an honor to be part of this.”

Johnson, who currently serves as a veteran services officer in his native Michigan, concurs with
Chavis.

“When they called me to ask if I wanted to come and visit with “Top,” I dropped everything I had going on and found a way to get here just for him,” he said. “That’s the kind of impact he had on me.”

Lewis smiled as he looked around the room at the now middle-aged men swapping stories and enjoying their meal.

“They were just 18, 19 years old, most of them, when we were together,” Lewis concluded. “I did try to be like their father, a mentor. This is the first time we’ve all been together in 30 years. I retired from the Marines with them, and I think that’s why we are all excited to see each other again. This is a great night for me.”