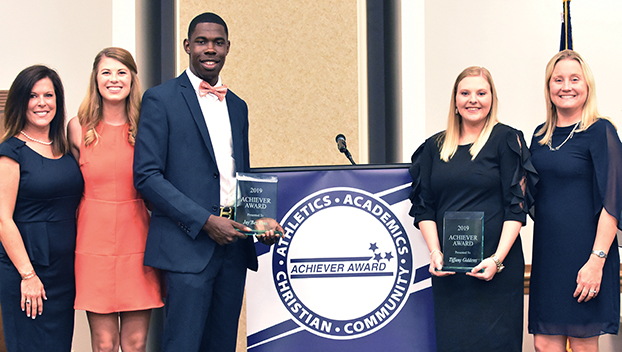 Ja’Bez Sims, third from left, and Tiffany Giddens, second from right, were the winners of the annual Achiever Award last week. They are pictured with, from left, Tina Caver of the Greenville YMCA, Courtney Rudowski from the Greenville Chamber of Commerce and Chamber Executive Director Tracy Salter. | Photo by Kathy Pickens

Tiffany Giddens of Georgiana High School and Ja’Bez Sims of Greenville High School received special honors on May 2 as they earned Butler County’s Achiever Awards for 2019.

The 22nd annual Achiever Award dinner was held May 2 in the Wendell Mitchell Conference Center on the Greenville Campus of Lurleen B. Wallace Community College. The night featured the introduction of all 31 nominees from schools in Butler County. And guest speaker Lemanski Hall, an Alabama native and current defensive backs coach at Clemson University.

Giddens is a senior at Georgiana High School and the daughter of Don and Sherri Giddens. She has been a member of the cheerleading squad and varsity softball team where she currently serves as captain. Giddens has been selected as an All-American-Varsity cheerleader, nominated for the Bryant-Jordan Achievement Award, was named best catcher, most valuable player and most improved player. She has also held the offices of vice president for SGA, treasurer for HOSA, treasurer for Mu Alpha Theta and treasurer for the National Honor Society as well as serving on the student advisory council and being a member of the interior design club. Giddens is a member of Brushey Creek Baptist Church where she participates in Discipleship Now, vacation bible school, community outreach, Operation Shoebox and volunteers at student life camp.

“I want to thank the Lord, without him, this never would have happened,” Giddens said after winning the award. She also thanked her parents and family for “pushing me to never give up.”

She also offered advice to her fellow graduates from around the county.

“To the class of 2019, push yourselves more in the future and never give up.”

Sims, is the son of Trena Curry and is a senior at Greenville high School. He has been a multi-sport athlete lettering in football, basketball, track and baseball. As an honor student, he has received the Scholastic Award for the highest GPA for the GHS Tiger football team. He is a member of the Key Club, Mu alpha Theta, and the art club. He volunteers his time with the Special Olympics, Butler County Fair, Safe Harbor, Dunbar Recreation Center, the Humane Society’s Bark in the Park, Operation Christmas Child and May Day at Greenville Elementary School and W.O. Parmer Elementary School. Sims also serves as a tutor for fellow athletes and peers and young children. He attends College Street Church of Christ where he assists with the youth and volunteers time singing at the nursing home and Christmas caroling.

“I’m overwhelmed,” Sims said. “I didn’t expect to win it, but by the grace of God, He gave me the opportunity to win it and I just want to thank Him and everybody that supported me.”

“He is  a great representative of Greenville high School and a great, outstanding young man,” McLendon said. He’s a great leader and a great recipient of the award. We’re really proud of him.”

Hall encouraged the students to do their best, persevere and have a relationship with God.

“I am a believer,” Hall told the crowd. “I always have been a believer. I grew up in the church and had a personal relationship with God.  To me, football is a passion and from that first tackle I knew that’s what I wanted to do. I told my daddy I was going to be in the NFL and I made it.”

Hall went back and finished his bachelor’s degree a decade after leaving school to play in the NFL and encouraged the group to finish what they begin.

“I’ll share two words,” he said. “”Preparation and perseverance are words that can guide your life. I also appreciate that at any time I could call on the good Lord. I’m here by the grace of God.”

The program sponsored jointly by the Greenville Area Chamber of Commerce and the Greenville YMCA. The program was designed to recognize outstanding senior male and female athletes of Butler County, not only athletes, but also those who exemplify the attributes of Christian, community and academic leadership.