‘Greatest Show’ delights kids of all ages at historic theatre 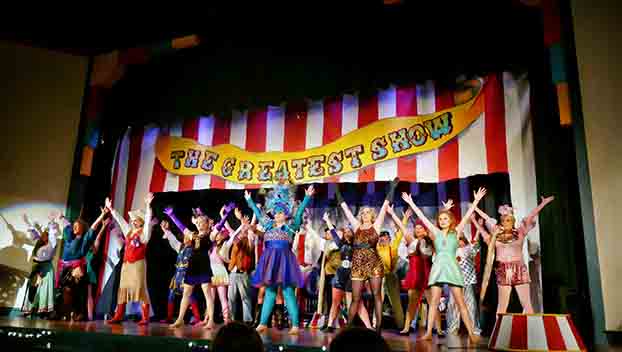 The adult cast of “Putting on the Ritz” dazzles with their colorful array of costumes for the opening number of the show. The production’s three seamstresses created multiple costumes for each of the 52 cast members. | Photo by Angie Long

Many kids have imagined running away to join the circus. Last week, the Greenville Area Arts Council gave children of all ages the chance to do just that.

The GAAC brought “The Greatest Show Yet” to the Ritz Theatre downtown with more than 50 cast members singing, dancing and clowning around to entertain the packed houses for three consecutive nights. The musical fundraiser, which has become a spring tradition in the Camellia City, helps defray the costs of the GAAC’s artistic season each year.

Twenty numbers revolving around the colorful and tumultuous life of carnival and circus life featured a mix of familiar faces and some newcomers to the Ritz Players and Ritz Kids. Todd Simmons, a featured soloist in “A Million Dreams,” who also performed Journey’s “Faithfully” while accompanying himself on the piano, was new to the cast.  Shelby Stewart, who performed alongside Simmons, Madison Castleberry, Ceil Gregory and Stephen Hamilton in “A Million Dreams” was also a Ritz “newbie.” Other new cast members included Trever Vickery, Eva and Sophia Shealy, Alyssa Johnson, Clay Gunter, Jessie Burgans, Jonathan Sheffield and Tyler Tomlinson.

Veteran Ritz Players bringing their powerhouse vocals to solo and ensemble performances included Stacey Edwards (“No Roots”), Vicki Burt (“This is Me”), Laura Simmons (“Never Enough”), Beth Cooper (“Tightrope”), Kevin Pearcey (“The Greatest Show” and “Come Alive” with Morgan Gibson) and Lori Neilson (“Baby Mine” with Ceil Gregory). In a real breakout performance, second-year Ritz Player Turner Vickery delivered with his rendition of “Thunder” by Imagine Dragons, while “old pros” Steve Norman and Tommy Ryan brought smiles with, respectively, “The Show Must Go On”  and “The Gypsy in Me,” the latter featuring Jessica Bell as Ryan’s tango partner. Ryan returned with Stephanie Connor to perform the lively and whimsical “Good Life” with the adult ensemble.

Jennie Hamilton was a saucy, sassy ringmaster in red leading her crew of dancers in “Circus,” while the men’s ensemble offered a blast from the past with 60’s classic “Green Tambourine.”

The youth cast delighted the audience with “Tears of a Clown,” “IKO” and “Baby Elephant Walk,” while the middle school girls gave a spirited performance of “Firework.”

Long-time Ritz Player Tom Payne provided a stirring and memorable performance of “From Now On” with the ensemble to close out “Putting on the Ritz” 2019.

“Thank you for being such great audiences every night and there’s one thing I want you to do,” director Nancy Idland said following Saturday night’s show. “Mark your calendars for the last of April and come see us in 2020.”