Eagles head to second round 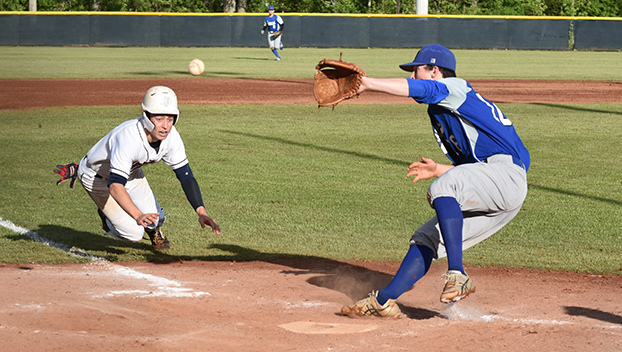 aron Brack slides into home plate during the Eagles’ first round victory against Kingwood Christian Academy. | Photo by Kathy Pickens

Following a tough, 3-2 extra-inning victory over Kingwood Christian Academy last Thursday in Greenville, Fort Dale Academy cruised to an 11-6 win over the Lions in the nightcap to advance to the second round of the AISA state playoffs this week.

The Eagles will take on Pike Liberal Arts at 4:30 p.m. Thursday in a doubleheader in Troy as the team advances in the Class AAA playoffs. A third game will be played at 4:30 p.m. Friday, if the teams split Thursday.

Jackson Blackmon hurled a gem in the opening game of FDA’s series against Kingwood. He went the distance – pitching eight innings – striking out 10 batters and allowing no walks.

Junior outfielder Baron Brack led the Eagles at the plate, legging out an RBI triple in the bottom of the seventh inning to tie the game, 2-2, sending the game into extra innings. Fellow outfielder Caden Coker slapped a walk-off single in the bottom of the eighth, scoring Davis Gaston from second, after Blackmon forced a fly out and two ground outs in the top the frame.

Brack finished the game 1-for-3 at the plate with his game-tying triple and an RBI. Gaston chipped in with an eighth-inning double and scored twice. Coker and freshman Jacob Foster each chipped in with RBI singles.

Freshman Braxton Kimbro and junior Evan Clark finished the game with one single each. Kimbro also scored the game-tying run in the seventh.

Following a 30-minute break, Fort Dale powered through the second game with an eight-run seventh inning to break away from Kingwood to capture the win.

Brack and Kimbro both led the team’s offensive charge with two hits each. Brack had two doubles, drove in four runs and scored once and Kimbro added two singles and scored once. Gaston finished with a two-run single and drove in a third run on a sacrifice fly.

Sophomore Dalton Daniels also had a double in the contest, had an RBI and scored once. Fullington chipped in with a single and recorded an RBI following a walk. Nathan Little and Jacob Foster each finished with one single. Little scored two runs, while Foster crossed the plate once.