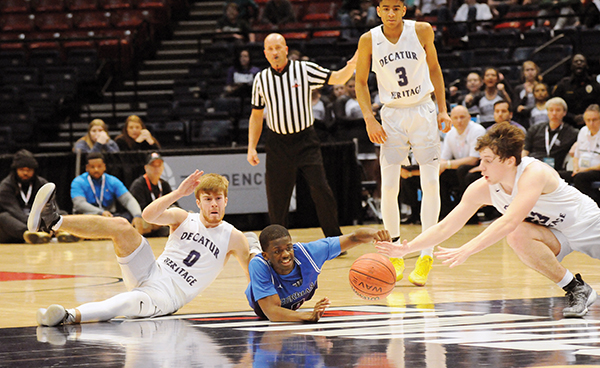 Georgiana’s hopes for a state title in Class 1A basketball ended Monday as Decatur Heritage beat the Panthers in overtime 60-58.

Decatur Heritage’s GianCarlo Valdez stripped the ball from a Georgiana player and drove down the court to score, putting up a shot as the buzzer sounded to send the Eagles to the title game Thursday. The winning layup ended a remarkable comeback for Georgiana that included back-to-back three-pointers late in the third quarter by Jaheim Powell, which brought the Panthers to within three after trailing most of the game.

Georgiana got off to a good start with Christian Williams nailing a three to begin the game. Decatur Heritage took its first lead at 6-5 with 1:56 left in the first quarter. The Eagles led the Panthers 10-5 at the end of the first.

Georgiana hustled its way to close the gap late in the third with Powell’s three-pointers and a pair of free throws. With 6:55 to go in the game, Georgiana took the lead 37-36 on a two-pointer by Christopher Mixon. After a goal tending call late in regulation against Decatur Heritage, the two teams were locked at 47-47.  Decatur’s Will Jones blocked a Georgiana shot to end regulation in a tie.

Powell opened the overtime stanza nailing a three from the outside and Mixon hit one from the corner to give Georgiana a 53-49 lead. Powell put up a floater in the lane to give the Panthers a 55-49 lead.

Lecedric Haynes hit a free throw to give Georgiana a 56-53 lead with 57.3 seconds left be-fore Valdez nailed a three for Decatur to tie the game at 56.  Mixon tipped in a rebound to give the Panthers a 58-56 lead with 31.6 seconds left and the Eagles quickly tied it again with 17 seconds left at 58-58.

As Georgiana tried to work the ball into the frontcourt to put up the last shot, Valdez came away with the steal for Decatur and hit the buzzer-beating shot to give the Eagles a 60-58 win.

Georgiana coach Kirk Norris said the loss was a tough one to take.

“I’m extremely proud of my guys,” he said. “We got down and could have folded, but these kids never quit. It’s probably the most difficult game I’ve had to watch like that. It was pretty heartbreaking. The kids fought and never gave up.”

During the second half, Powell scored eight straight points to put the Panthers back in the contest.

“We had to just keep fighting,” he said. “We were down and we just couldn’t give up.”

Norris said he was proud of the resiliency that the team showed throughout the game.

“I’ve had these guys since seventh-grade and they’ve been down before and I knew their character,” he said. “They don’t quit. We could have been down 20 and they would have kept fighting. That’s just the way these kids are, they don’t’ quit — they don’t give up. I knew we had a chance and they just kept on battling.”

Junior Martavius Payton, who had a tough afternoon after getting four quick fouls, said the team is determined to make it back.

“We worked extremely hard this year,” he said. “We’re going to work hard and try to get a ring next year. “

Norris said he felt the defensive pressure wasn’t as good as it should have been in the first half, but the Panthers got stronger as the game went on.

“We revved it up in the second half and made it a little bit more difficult on them,” he said. “I kept telling them we had to pressure them and run our press. We wanted them to earn every basket at the end. It created some opportunities for us for us to score in the second half, which was what we needed. We struggled to score for a while. Going in and out of transition and pushing the ball really helped.”

Powell led the Panthers with 17 points and was three of five from three-point range. Williams scored 14 points and hit three of nine three-pointers. Mixon scored 11 points, Haynes scored eight, but had 12 rebounds and Payton scored six points and snared 13 rebounds. Azenda Pennington rounded out the scoring with two points for the Panthers.

Decatur Heritage was led by Noah Boler, who had a triple-double with 24 points, 11 rebounds and 10 blocked shots.

The Panthers finished the season 27-6.