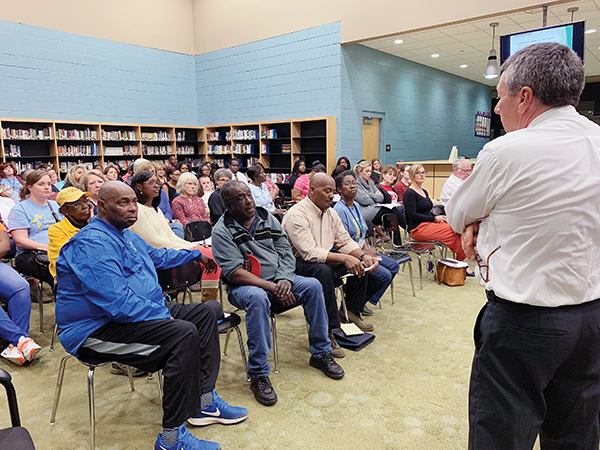 Members of the Butler County Board of Education are discussing plans to take video of their meetings and share the on the district’s website for all to see.

During the Feb. 21 meeting at the Georgiana School, board members and Superintendent Dr. John Strycker discussed the board’s options. Board member Brandon Sellers brought up the issue in the form of a motion to broadcast or video the meetings, which then began a discussion about how the process would work.

“I’m strongly in favor of finding a way to broadcast our meetings because it’s tough for people to get to Greenville for a 5 p.m. workshop or 6 p.m. board meeting if they work or have children involved in sports or band, or if they have homework,” Sellers said. “People constantly ask me about what we actually do at these meetings, but they are unable to come.”

Sellers and other board members asked about the difficulty of videoing the meetings and uploading them to the district website.

“A lot of other school systems do it,” Sellers said. “I’m not talking something as technical as C-Span, but to me it wouldn’t be hard to set an iPhone in the back and record what we do. I’m strongly in favor of us finding a way to do it as long is it is not cost prohibitive.”

Other discussions included equipment, such as microphones to enhance the sound. The board will investigate the cost of items needed to possibly begin the process.

The videos would include all of the public portions of the meetings, with executive sessions, which are closed to the public, being excluded.

Boar member Mickey Jones agreed with Sellers’ assessment that it would benefit the school district and suggested sending the information to the policy and procedures committee.

“The board needs to be as transparent as it can be,” he said. “I want to be as open as we can.”

The board also passed a resolution to repeal the Alabama Accountability Act after discussions Joe Eiland and Larry Lee who both spoke at the meeting. Eiland explained the impact of the act, which was enacted by the legislature in 2013.

“Each county is different,” he said.  “There is an impact when it comes to siphoning money from the educational trust fund. It is estimated that Butler County’s losses were around $577,000 over a time period of 2013 to present. Many counties, cities and schools districts across the state have now joined forces and aligned with many others in asking the legislature to please repeal this act. Basically you are siphoning money from an educational trust fund to help large corporations and in some cases, individuals. While we have a private school in Butler County, we don not have a failing school. That act basically addresses kids in failing schools — the bottom 6 percent — it gives them an opportunity for scholarship to a private school. Only about 6 percent of the students in Alabama have actually been offered those. It is a smaller percent who actually took advantage of it.”

Eiland said there were concerns about the use of the money being taken from the educational trust fund.

“Inevitably it is money taken from our children,” he said.

Lee said that out of 722,000 public school students in Alabama, 3,600 scholarships have been awarded.

“The Alabama Accountability Act is what happens when the fox gets in the henhouse,” Lee said, referring to the state legislature.

Lee also praised the large crowd that had turned out for the board meeting.

“I’m impressed with the people here tonight,” he said.

The board then voted 5-0 to adopt a resolution calling for the repeal of the Alabama Accountability Act.

All of the meetings will be held at the Central Office Boardroom located at 949 Oglesby St. in Greenville.