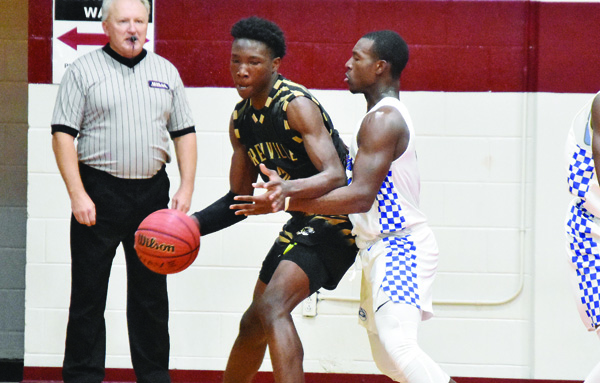 Four points is all that separated the Greenville Tigers from winning the 52nd annual Andalusia Christmas Tournament last weekend. The Tigers played Flomaton in the championship game on Saturday, Dec. 16 and lost 50-47.

Greenville started off the tournament with a 78-48 win over Opp. The Georgiana Panthers also competed in the Andalusia Christmas tournament in the same side of the bracket as Greenville. The Panthers knocked of Florala 71-59 in the first round. The stage was set for a rematch of Greenville vs. Georgiana from just one-week prior when the Panthers won 59-56.

It was Greenville coming out on top in the rematch by a score of 54-53 to advance to the championship game. Tigers’ head coach Marcus Mikles said the victory over Georgiana came at the right time.

“Our guys wanted to get some revenge since Georgiana had just beaten us,” he said. “It was good to get the win, and get in a position to win a tournament.”

Against Georgiana, Dawson Quaye led the way with 12 points and 11 rebounds. Kevin Brown had 11 points and six rebounds.

Georgiana went on to lose the next day to Andalusia 53-47. Following the tournament, the Panthers were 7-2 overall. They hosted a Christmas Clash over the weekend.

In the championship loss against Flomaton the next day, Erik Rudolph had 10 points, and Brown added seven points and nine rebounds. The Tigers were 2-2 overall following the Andalusia Christmas Tournament.

“The kids played really hard in all three games,” Mikels said. “We’re still just a little bit rusty. We’ve got to find a way to generate some more points on offense. We’re shooting from the outside just a little bit too much. I want to see the ball start going inside the paint more often.”

The Tigers competed in the Coach Larry Chapman Foundation Basketball Tournament over the weekend in Montgomery. Greenville will compete in the Gulf Coast Classic beginning tomorrow.

The Tigers will return home against Carroll on Tuesday, Jan. 8.