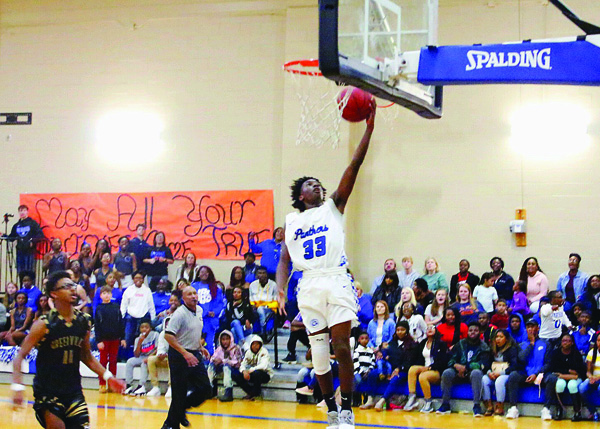 Turn on the gym lights, and warm up the popcorn machines because basketball has tipped off in Butler County. Two of Butler County’s best squared off on Saturday as the Georgiana Panthers hosted the Greenville Tigers in a varsity boys matchup.

Georgiana came into the contest with a 4-0 record while the Tigers had yet to play a game. Georgiana would go on to win the game 59-56.

The Panthers are now 5-0 and have yet to play a team with a classification lower than 3A.

“We like to play these bigger schools early to help us later in the year,” Georgiana head coach Kirk Norris said. “Besides being a 5A school, playing Greenville is fun for our players and fans because there’s a lot of familiarity between the two schools.”

Against Greenville, Lecedric Haynes led the Panthers in scoring with 18 and also pulled 10 down rebounds. Azenda Pennington added 11 points and Jaheim Powell netted 10.

“We’ve been able to do a good job of getting offensive rebounds so far this season,” Norris said. “Martavius (Payton) is our best rebounder because of how long he is, but we have a few others who do a good job. Lecedric and Chris Mixon are 5 foot 10 inches, and play like they’re 6 feet tall or taller.”

The Tigers were not quite at full strength against Georgiana, however. Five of Greenville’s key players on the hardwood were also key players on the gridiron. Javion Posey, Arick Boggan, Jabez Sims, Tyland Simpson and Brandon Haynes will all be key components to the Tigers’ success this season. None of them played against Georgiana. They all saw their first action last night against Jeff Davis.

“Those guys had just come off 20 weeks of playing football,” Tigers’ varsity boys basketball coach Marcus Mickels said. “We felt they needed a break from the hitting, and physical stress for at least a week.”

Against Georgiana, Dawson Quaye led the Tigers in scoring with 16 points and 11 rebounds. He also had four blocks on defense. Jadakiss Anderson added 12 points and four rebounds.

“I know we didn’t have all of our guys, but we still didn’t play that great,” Mickels said. “Georgiana does a great job on of the offensive boards. You have to be ready to block out and rebound against them. We didn’t do that, and it hurt us.”

Both Georgiana and Greenville will compete in the Andalusia Christmas tournament, which begins tomorrow.

Here’s the complete bracket: (Coach Norris is sending me the bracket in the morning)

Three down, one to go: Tigers take on Vigor…