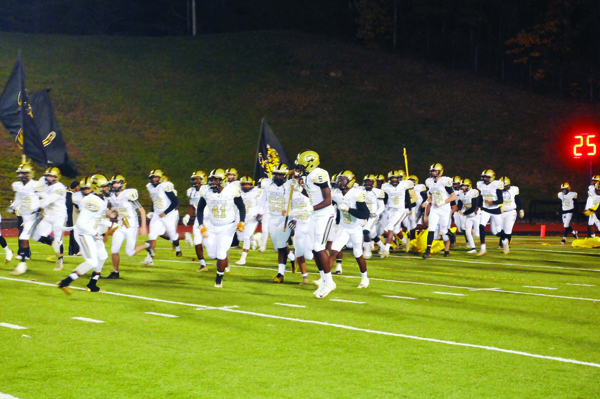 Lawson Field in Birmingham, the site of the quarterfinal matchup between the Greenville Tigers and the Ramsay Rams last Friday night, proved to be ideal for the Class 5A clash.

The historic stadium features state-of-the-art artificial turf, which lends itself to helping fast players seem even faster. Greenville senior safety Bishop Riley took full advantage of the fast surface when he returned the opening kickoff 72 yards for a touchdown on the way to a 27-13 victory over the fifth-ranked Rams.

There is no lack of speed on this year’s Ramsay team either, however.

After just 12 seconds, the sixth-ranked Tigers led 7-0 following Jesus Alvarez converting the extra point. On the ensuing kickoff, the Tigers were flagged after the ball was kicked out of bounds. Instead of taking the ball at the 35-yard line, Ramsay elected to make Greenville re-kick. It paid off.

Ramsay senior wide receiver Cedarius Doss received the kickoff and answered Riley’s with a touchdown return of his own. The Tigers blocked the extra point and after just 45 seconds, the score was 7-6.

“It was definitely a back-and-forth game for the entire first half,” Greenville head coach Josh McLendon said. “We needed to settle down in the first half on the field and on the sideline. I think once we did that in the second half, we were able to take control of the game.”

After two electrifying plays to start the game, both teams struggled to find the end zone. Both defenses played well and made it difficult for either offense to find traction.

The Tigers would finally break through right before the half when senior quarterback Javion Posey found running back Arick Boggan on a 55-yard touchdown throw and catch. The extra point was blocked, but at the half Greenville led 13-6.

Both defenses continued to hold strong into the third quarter. However, Ramsay would score the quarter’s lone touchdown at the 2:24 mark. The extra point was converted, tying the game up 13-13 heading into the fourth quarter.

Greenville owned the fourth quarter by scoring two touchdowns. One on a long pass from Posey to Riley and the last one was a touchdown run by Posey. With its lead extended to two scores, Greenville was able to watch as the minutes ticked away.

“I was extremely proud of the way our guys played and competed,” McLendon said. “Ramsay is a good team and we knew it would be tough to get a win. I’m excited for our guys and our fans for the opportunity that’s in front of us.”

Riley led the way for Greenville with 274 all-purpose yards and two touchdowns. Posey threw for 170 yards and one touchdown, while rushing for one touchdown. Boggan ran for 79 yards and had 55 yards receiving with one touchdown catch.

Greenville now faces No. 2 Vigor this Friday night at home in the semifinals of the state playoffs. It is the furthest the Tigers have gone in the playoffs since 1994. The Tigers also won the state championship in 1994.

Georgiana falls to Maplesville, bows out of playoffs