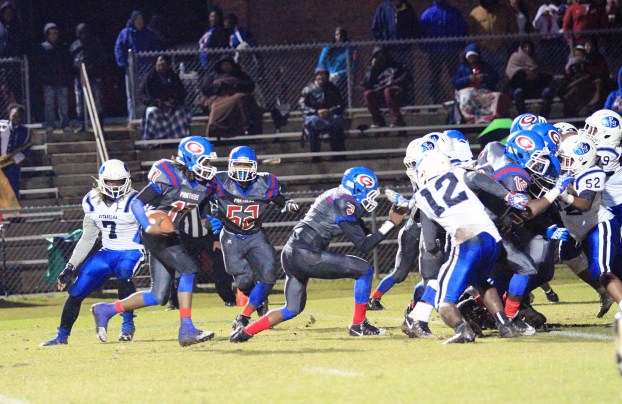 Parents often find themselves asking their children, “Do you believe me now?”

This question can be asked for a number of reasons, but for Georgiana head coach Ezell Powell there was only one reason to ask his team Friday night, “Do you believe me now?”

The sixth-ranked Panthers (10-1) hosted Notasulga in the first round of the Alabama High School Athletic Association’s state playoffs and escaped with a 41-34 home win over the Blue Devils (4-7). Georgiana came into the game as the No. 1 seed out of Class 1A, Region 2, while Notasulga was the No. 4 seed out of Region 4.

After the game, Powell admitted that he concerned with his team’s mindset leading into the game.

“This is the playoffs and you have to play your best each week,” he said. “I told this team that Notasulga is a good football team with several good players. As we know, these are kids in high school that like to look at where they’re seeded and think it’s going to be easy to beat a No. 4 seed. I hope they believe me now.”

The game started out as most games do for Georgiana – quickly. After just five minutes, the Panthers were leading 14-0 after quarterback Chris Mixon found the end zone on a seven-yard touchdown run, followed by a one-yard touchdown run.

All things seemed to be business as usual for Georgiana, but the Blue Devils had other plans. Notasulga quarterback Walter Tatum scored on a 26-yard touchdown run with 11:20 left in the second quarter to cut into Georgiana’s lead.

On the next drive, Georgiana scored again, but it still didn’t seem to bother Notasulga. The Blue Devils came right back on the next drive to score on a 75-yard touchdown pass from Tatum to wide receiver Jimmy Pitts.

“Notasulga is a team that was in every game they played this year,” Powell said. “They came into this game with the intention of winning and they really competed hard. It was a good lesson learned for our guys.”

A strong point to the Notasulga offense Friday night was sophomore running back Daryl Brown Jr. He was able to rush for just over 100 yards and had one touchdown. Brown also had a 45-yard punt return for a touchdown. Tatum threw for 155 yards and two touchdowns.

Georgiana’s Mixon also rushed for more than 100 yards and finished the game with five rushing touchdowns. Although he accounted for five of the Panthers’ six touchdowns, it may have been Christian Williams who turned the game around for Georgiana.

Following the Notasulga scoring punt return in the third quarter, Williams received the ensuing kickoff at the 5-yard line. He found a crease near the 25-yard line and let his legs do the rest on his way to a kick return for a touchdown. The return put the Panthers ahead 34-26 just before the third quarter ended. It was enough for Georgiana to ultimately put the game away.

“We had a lot of moments in the game when we had to respond,” Powell said. “The kick return by Christian was big in regards to shifting momentum back in our favor. I’m happy we won, but we’ve got a lot of work to do if we plan on advancing anymore.”

The Panthers will now take on Maplesville next week in the second round. Georgiana will once again get to stay home and host the No. 3 ranked Red Devils (9-1), the No. 2 seed out of Region 3.

On the verge of a more than $26 million expansion, Hwashin America Corporation was granted tax abatements during Monday night’s... read more