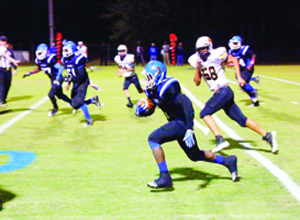 It’s playoff time for the sixth-ranked Georgiana Panthers and for this year’s group of seniors, it’s business as usual.

Coming off a bye week, Georgiana head coach Ezell Powell said his team is excited for the challenge.

“Notasulga plays very physical and they like to get after you on defense,” he said. “Anyone you play is going to be good at this point. We’ve got to go into this game with the mindset that we’re going to execute on both sides of the ball. This isn’t the regular season. If you play bad and lose, you’re done.”

Georgiana posted a 9-1 record in the regular season and are one of the Top 10 teams in all of Class 1A, according the Alabama Writers Association. The Panthers and Blue Devils have no common opponents and have met only one time prior to Friday night in the first round of the 2014 playoffs.

“Getting ready for the playoffs is a lot of fun for us as coaches,” Powell said. “In the playoffs, you really have to play a chess match with the other team. These games are really the best measuring stick for your players and coaches.”

Powell said adjustments were made to the defense earlier in the season. He feels it was the senior leadership that allowed players to flourish in new roles.

“This group of seniors have been there and done it a time or two,” he concluded. “They really responded well to the adjustments at a few positions we made earlier in the season. Because of that, we’re a better team over all. I’m excited to see these guys compete in a playoff atmosphere.”

Kickoff is set for 7 p.m. Friday night at Harmond Field. Admission is $8 in the first three rounds of the playoffs.