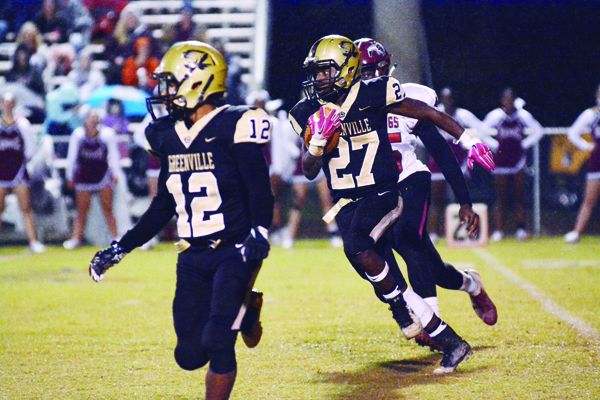 A 10-game regular season, which netted eight wins for the sixth-ranked Greenville Tigers, has ended and now the playoffs have arrived.

Friday night, the Tigers will host Fairfield (4-6) in the first round of the state playoffs. Fairfield finished fourth in Class 5A, Region 4. The Tigers from up north had to defeat Central Tuscaloosa last Friday night to earn a spot in the playoffs.

Greenville head coach Josh McLendon said Fairfield will be a strong first-round test regardless of its seeding.

“People like to look at the seeding and say, ‘Well, we’re the No. 1 seed and they’re the fourth seed, so it should be easy,” he said. “That’s absolutely not the case. This Fairfield team is well coached and they play very hard. They got a big win over Central Tuscaloosa last week and are sure to come here with the mindset of winning. That’s everyone’s goal in the playoffs.”

Fairfield is led by senior safety Damien Miller (No. 11), who has returned five kickoffs and three punts for touchdowns this season. The 6-foot, 170-pound safety has committed to the University of Alabama Birmingham to play football. Fairfield head coach Keon Handley said Miller and a certain Greenville Tiger share qualities.

“No. 3 (Bishop Riley) for Greenville and Damien are a lot alike in that they know how to make big plays when they’re needed,” Handley said. “It’s hard to put into words just how much Damien means to this team. It’s going to take a great effort from him and the rest of the team to get a win at Greenville. They’re a heck of a football team. Coach (McLendon) has done a heck of a job in the short time with that program.”

This will be the first-ever meeting between Fairfield and Greenville. McLendon stressed the importance of his team having a good week of preparation leading up to the game Friday night.

“We’re now in a one-game season and every team wants the same thing – a state championship,” he said. “Having a good week of preparation is so important now. If we’re going to beat a playoff team we have to play very well.”

Kickoff is set for 7 p.m. inside Tiger Stadium. Ticket price for the first three rounds of the state playoffs is $8.