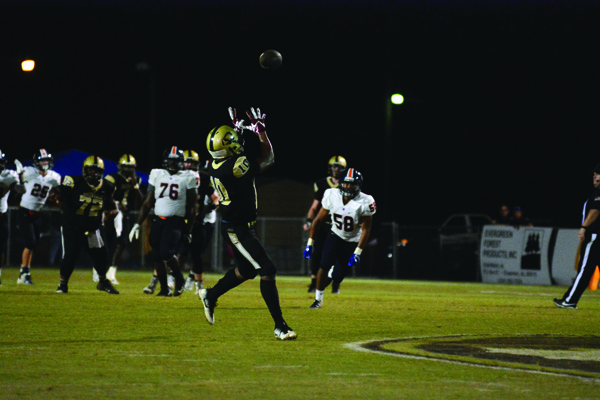 The seventh-ranked Greenville Tigers needed a win against Beauregard Friday night to claim the region title – and that’s exactly what they got.

With an undefeated 5-0 record, Greenville claimed the Class 5A, Region 2 crown with a 34-14 road victory. The Tigers will host a first-round playoff game Nov. 9, at Tiger Stadium.

The Tigers put on an offensive showcase in the first half, and at the half led 27-13. The Tigers defense was stingy all night as well.

“The defense played really well and set the tone for the game,” Greenville head coach Josh McLendon said. “Sawyer Hennis had a big game with several key tackle. Jabez Sims was able to get an interception at a key point in the game as well.”

McLendon said Aric Bogan and Chris Bedgood played well on the offensive side of the ball.

“We were able to do enough in the first half on offense to separate from them,” he concluded. “I thought we played a bit sloppy in the second half, but overall it was good win.”

The Tigers will now turn their attention to Wilcox Central next Friday night on the road. The lone region game remaining is Carroll on Friday, Oct. 26, at home.