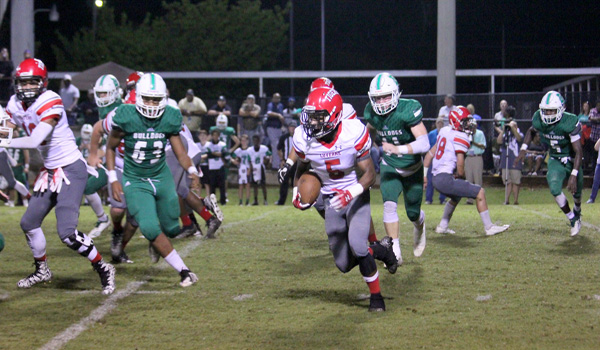 A stormy night reflected the emotions of both teams heading into Friday night’s rivalry game between Luverne and Brantley.

The Tigers, coming into the game 4-0, would face their sternest challenge of the year from the Bulldogs, who fell 2 weeks ago against a tough Georgiana Panthers team for their first loss.

The Tigers started off the game with a strong defensive stand but fumbled and lost the ensuing punt, after which the Bulldogs drove and were forced into a field goal.

On the following drive, the Tigers managed to quickly drive and score led by quarterback Tae Brantley.

With the score at 7-3, lightning forced a 30-minute delay that slowed momentum on both sides.

After the delay, the half ended with the score still at 7-3.

The second half was a back-and-forth battle, with Brantley taking a 17-14 lead heading into the 4th quarter.

An interception caused by Tiger linebacker Arian Gregory forcing a bad pass allowed the Tigers to drive and seal the game, final score 21-17.

Luverne head coach Scott Rials praised the performance of his team and the Bulldogs for mounting such a difficult challenge.

“Both teams played hard, and hats off to Brantley for putting up the fight they did,” he said.

“Our offense had its ups and downs this game, but the defense managed to hold them to around 60 rushing yards on the night.”

Next week, the Tigers will travel to face Goshen.

“[Goshen] is a fairly sound team. They are better than their record indicates. We’ve had a good week of practice since the weather has been better than last week. I expect it to be a good game,” Rials explained.