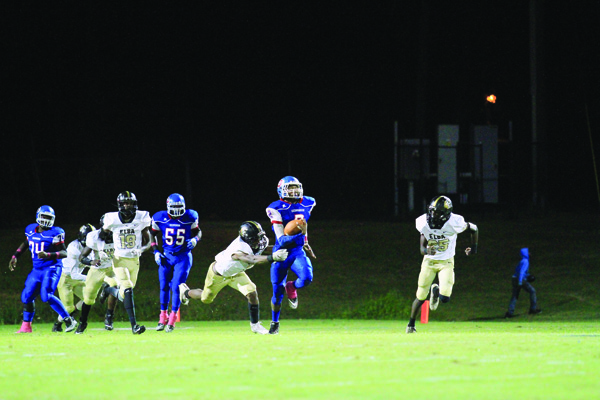 Friday night’s 35-27 win over sixth-ranked Elba was key for the seventh-ranked Georgiana Panthers in their quest to win the Class 1A, Region 2 title.

The game lived up to the billing as Elba had the ball with 2.8 seconds left and 53 yards in front of them to score and potentially take the lead. A final heave to the end zone for the Tigers landed incomplete and the Panthers came away with the 35-27 victory.

“We had prepared for that kind of situation and I thought our guys did a great job defending it,” he said. “We knew that playing tough and playing with resilience was going to be a must to win this one.”

The game opened with fireworks as Georgiana’s Chris Mixon took the opening kickoff 90 yards for the first touchdown of the game.

Elba, however, answered right back with a drive of its own to even the score up at 8-8. Even though Mixon brought back the opening kickoff, the Tigers’ opening drive proved to be what set the tone of the game. The remainder of the game would continue the same until the end – back and forth.

What was possibly the play of the game came in the fourth quarter when the Panthers were clinging to a 27-20 lead and forced Elba to punt. The Panthers ultimately stopped Elba and three plays later Mixon ran in for a touchdown.

With just four minutes left in the game, it seemed as the Panthers had all but wrapped up the victory, but Elba had different plans once again. Running back Richmon Singletary – who gave the home defense fits all night – brought back the ensuing kickoff for an Elba touchdown.

“There’s not many schools that can simulate what a player like Singletary can do,” Powell said. “That guy is a good ballplayer and was tough for us to defend. He and the rest of the Elba team could be a group we see again down the road.”

The Panthers will face Kinston and Red Level to end the regular season. Georgiana will be big favorites in both games and should wrap up the area championship with a win over Kinston next week on the road.

“I was very proud of our offense against Elba,” Powell said. “Our offensive line played fantastic. That group kept us out of unmanageable situations. We were able to operate in second down and short situations, which is also a credit to our running backs.”

Powell added that games like the Elba matchup will help prepare his team for the playoffs.

“These are the exact kinds of situations we wanted to be in,” he concluded. “If we’re going to make a run in the playoffs, we’re going to lean on these kinds of experiences.”