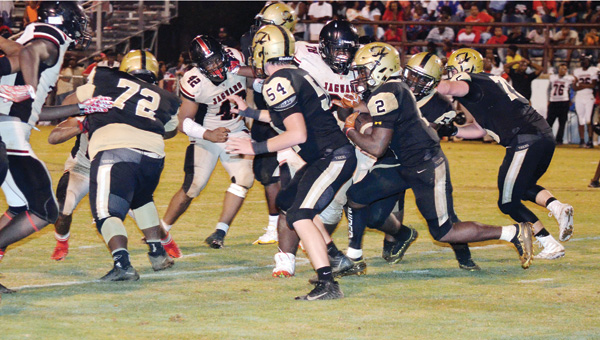 As hard as it may be to believe, the high school football season has reached its midway point.

After this Friday night’s gridiron clashes, there will be a clearer picture of how Class 5A, Region 2, will look come playoff time.

Following last week, Greenville leads the region with a record of 2-0 and 3-1 overall. The Tigers picked up a convincing win at Tallassee two weeks ago, but struggled to put Valley away last Friday night in front of its home crowd. Despite several personal foul penalties against Valley, Greenville head coach Josh McLendon believes his team needs to keep doing what it’s doing.

“We’re obviously not happy with the penalties in last week’s game,” he said. “But I like where we are and I think we have a lot to build on after playing four games. There’s always an area we need to improve. There are some aspects of our special teams that needs to improve and I’d like to see us run the ball with some more consistency.”

Last week, Greenville quarterback Javion Posey rushed for more than 80 yards and a touchdown. Starting running back Aric Boggan ran nearly the same exact yardage, but fumbled near the goal line against Valley in the second quarter, which was ruled a touchback in Valley’s favor.

The Tigers now turn their attention to another region opponent in Rehobeth. The Rebels are struggling through four games with a 0-4 record. The Rebels have been outscored 150-41 in those games.

“Rehobeth runs a spread offense, which we’re used to seeing each day in practice,” McLendon said. “It’s going to take a great effort from our team to go on the road and get another region win. We preached fundamentals each week. They’re especially important when you get to the midway point in the season.”

Greenville starting defensive lineman Malik Porterfield suffered an ankle injury in the first game of the season, which forced him to miss the game against G.W. Carver. He played against Tallassee, but was absent again in the game against Valley.

“Malik is nursing another injury, but he should be good to go for Rehobeth,” McLendon said. “I feel good about where we are as a team to this point, but there’s a lot of things we need to improve on.”

Below are the current standings in Class 5A, Region 2:

Each team has four more region games to play this season after this Friday.