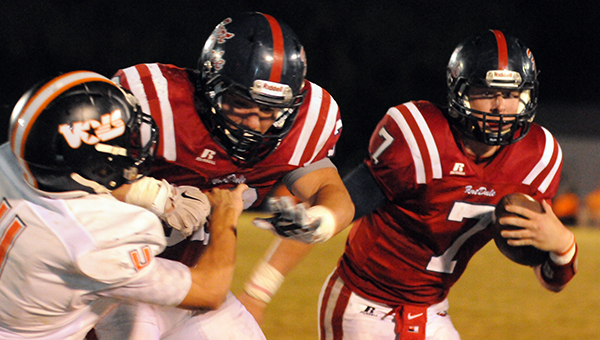 Fort Dale Academy quarterback Luke Taylor follows the block of running back Clay Mansmann during the Eagles’ 34-14 loss to Monroe Academy Friday night. Taylor rushed for 151 yards and a score in the loss. (Advocate Staff/Andy Brown)

The Monroe speedster helped the Vols seize control of the game on the contest’s opening kickoff. Dalton McKenzie returned the kick to the Fort Dale 13 yard line, and then carried the ball on three consecutive plays, finally punching the ball into the end zone from 3 yards out.

Dalton McKenzie put the Vols up two scores late in the first quarter when he snagged a pass from Griffin McKenzie and outraced the Eagle defenders for an 89-yard touchdown.

Powell’s successful point after try made it 14-0 with 19 seconds left in the opening stanza.

“We can’t shoot ourselves in the foot and expect to win,” Fort Dale Academy head coach James “Speed” Sampley told his team following Friday’s loss, which is just the second of the season for the Eagles and the first since the third week of the season.

Midway through the second quarter, Griffin McKenzie and Dalton McKenzie hooked up again, this time for a 44-yard touchdown. Powell added the extra point and the Vols (8-1, 4-0 Class AAA, Region 2) led 21-0.

Fort Dale (6-2, 2-2 Class AAA, Region 2) finally found its way into the end zone with 1:48 to play in the first half. FDA running back Andrew Salter weaved his way through the Vols for a 15-yard score.

Less than a minute later, however, the Vols answered with another score. This time it was Andrew Lambert on the receiving end of a 40-yard touchdown pass from Griffin McKenzie.

The point after attempt was wide right. With 50 seconds to play in the first half, the Vols led 27-7.

Fort Dale cut the lead to two scores with just more than 5 minutes to play in the third quarter when quarterback Luke Taylor scored from 1 yard out. The touchdown was set up by a pass from Taylor to Tripp Richardson that gave the Eagles a first down at the 3 yard line.

Crenshaw added the extra point and the Eagles trailed 27-14.

Like before, the Vols had an answer that doomed the Fort Dale comeback bid.

McKenzie scored his final touchdown of the night, this time from 42 yards out. Powell added the point after to cap the scoring and seal the Vols 34-14 victory.

Fort Dale will now turn its attention to Hooper Academy.

“We’ve got a big region game we have to win next week,” Sampley said.

The Eagles and the Colts will face off at 7 p.m. in Hope Hull.