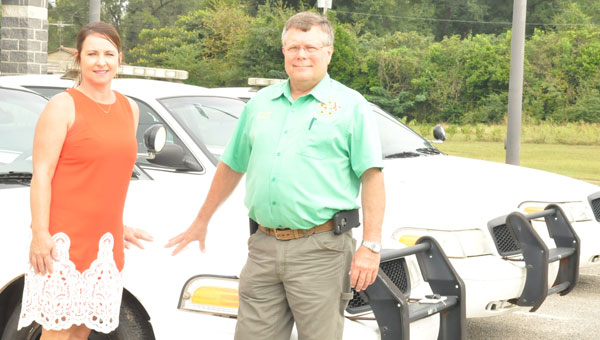 Thanks to the generosity of the Mobile Police Department and the determination of Crenshaw County Commissioner Michelle Stephens, the Crenshaw County Sheriff’s Office is now the proud owner of three more patrol vehicles.

According to Crenshaw County Sheriff Mickey Powell, the office will use one car for the time being as a main patrol car, and the others will be used in case of emergency. The office now has 13 cars that can be used.

“Mobile got new cars, so they were kind enough to give us these. They were gracious enough to donate the cars to us, because the Sheriff needed them. He’s had two or three totaled out, and we are just very thankful to get them,” Stephens said.

The donated vehicles came already equipped with the necessary internal technology and features; the only remaining features will be added to the exterior of the vehicles.

“We’re testing them and running them. We have to get them striped like the other cars, and one is already on the road. It just needs the striping,” Powell said.

“Michelle worked her rear off. She started this project, she made phone calls. At the time, we were actually down two cars, so she got on the phone and started calling around.”

Stephens says that there is a possibility that more vehicles will be donated to Crenshaw County in the future, and others may be available at discounted rates.

“We’re working with different agencies across the country and southeast. It just about making the right contact at the right time to get some surplus that they don’t need anymore,” Stephens said.

Bulldogs prepare to take on Lions

BHS senior wide receiver Tommy Spivey snags the ball at the beginning of the fourth. In the rivalry match of... read more