Shufford, Tigers too much for Jags 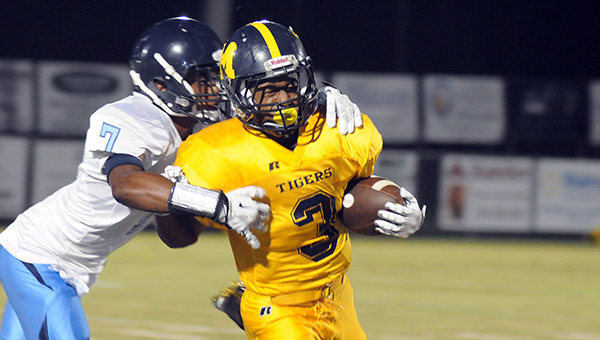 The 5-foot-8, 161-pound senior also returned an interception 25 yards for a score.

With the victory, McKenzie (5-1, 3-0 Class 1A, Region 2) extends it current winning streak to five games.

“This was a good homecoming win,” said second-year head coach Tony Norris. “I’m proud of that.”

The Tigers took any suspense in the outcome of the game away early.

McKenzie marched down the field on the game’s opening possession without tossing a pass for a 7-0 lead just 2:48 into the contest. Shufford capped the drive with his first score of the night from 17 yards out.

Senior William Brown added the point after attempt for a 7-0 lead.

A 10-yard touchdown scamper by Shufford with 2:30 remaining in the first quarter gave the Tigers a 13-0 lead before his interception return for a touchdown just more than a minute later put the Tigers up by three touchdowns. Brown added the extra point for a 21-0 advantage.

Brown helped the Tigers push their lead to 30 points late in the half with a 33-yard field goal and a fumble recovery that he returned 60 yards for a touchdown.

Barbour County avoided the shutout by scoring a touchdown to start the third quarter. The two-point conversion made it 30-8.

Shufford took the ball and started right, reversed his field and outran the Jaguars for a 55-yard score. Brown’s extra point made it 37-8 with 8:25 to play in the third quarter.

Barbour County chipped away at the Tigers’ lead by returning the ensuing kickoff for a touchdown, but it was too little too late.

Leading 43-16, Shufford scored his final touchdown of the night from 31 yards out to cap the scoring.

With a homecoming win under their belts, the Tigers will now shift their attention to region-rival Kinston.

“We’re going back to work Monday,” Norris said. “To do what we want to do, we have to win region games.”

The Tigers and the Bulldogs will square off at 7 p.m. next Friday in Kinston.