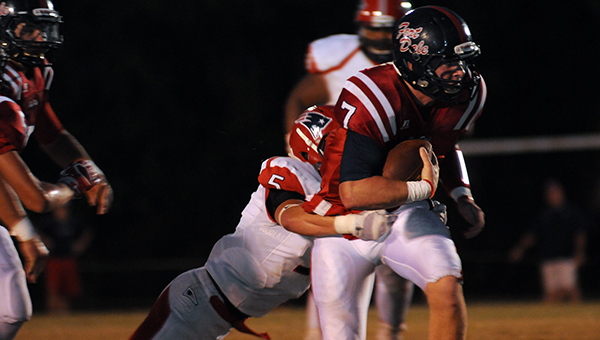 Five different Patriots recorded a rushing touchdown in the victory — the third in a row for Pike Liberal. Friday’s contest marked the first loss of the season for the Eagles, who scored wins over Evangel Christian and Wilcox in the first two weeks of the season.

“We’ve got some stuff offensively and defensively that we need to clean up,” Fort Dale Academy head coach James “Speed” Sampley said. “But one game doesn’t make a season. We have a region game coming up next week. It’s a huge game for us. We have to come back Monday and go to work.”

The Eagles (2-1, 0-1 Class AAA, Region 2) struck first in Friday’s contest. Junior quarterback Luke Taylor helped keep the scoring drive alive by picking up a first down on fourth-and-5 with 3:00 to play in the first stanza. After the Eagles worked their way down to the 4-yard line, Taylor barreled his way into the end zone for the score. Taylor also converted the two-point try to give the Eagles an 8-0 lead.

The Patriots would answer back early in the second quarter.

Junior quarterback Reed Jinright scored from two yards out, and senior kicker Hunter Jones knocked the extra point attempt through the uprights to cut the Eagles’ lead to just a single point.

That was all it took to get the Patriots rolling.

Pike Liberal took the lead with 2:38 remaining in the opening half when junior running back Reed Johnson scored on a 9-yard run. Jones’ extra point made it 14-8 in favor of the Patriots — a lead they carried into the intermission.

The Patriots picked up in the second half where they left off in the first.

With 8:57 to play in the third quarter Jinright connected with senior Justin Ball for a 31-yard touchdown. Jones tacked on the extra point for a 21-8 lead.

Ball added a 60-yard touchdown, and Jones booted his fourth point after attempt of the night through the uprights, to extend the lead to 28-8.

After Jinright was ejected for targeting Fort Dale wide receiver Tripp Richardson late in the third quarter, it looked like momentum had shifted to the Eagles. Taylor capped the drive with a 15 yard score and senior kicker William Crenshaw chipped the point after attempt through make it a two touchdown game at 28-15.

But a 55-yard return on the ensuing kick by senior running back Braydon Herrera set the stage for a 15-yard touchdown run by backup quarterback Reece Burbage. After a failed two-point attempt, the Patriots led 34-15.

An 81-yard touchdown run by Herrera and a successful point after attempt by Jones capped the scoring.

The Patriots finished with 372 yards of total offense, while Fort Dale tallied 311. The Eagles rushed for 218 yards, led by Taylor’s 65 yards. The Fort Dale signal caller was also 7-for-10 passing for 93 yards.

The Eagles will be back in action next Friday when they play host to Northside Methodist.

The Patriots will take on Monroe Academy in Troy.