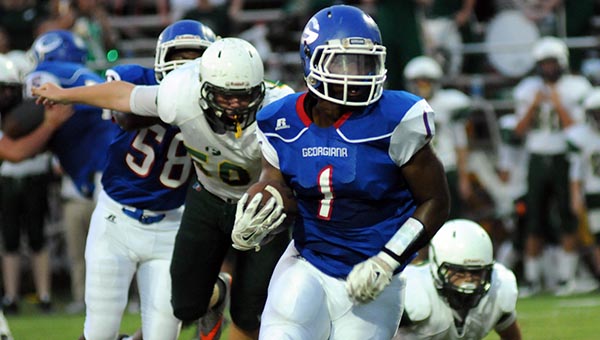 What it didn’t have was suspense.

Georgiana’s 56 points is the highest point total for the Panthers since scoring 65 points against Florala in Week 3 of 2015.

“That’s a great job getting back on track,” Powell said. “We’ve still got a long road ahead of us, and we have a lot to iron out, but that was a great job tonight.”

Just 1:38 into the game, junior running back Cameron Longmire broke free for a 25-yard scoring run.

Things only got worse for the Wildcats from there.

On the ensuing drive an errant snap led to a safety and a 10- lead for the Panthers. Following the free kick, Longmire once again blazed his way through the Wildcats defense to the end zone, this time from 45 yards out. Senior running back Derrick Johnson added the two-point conversion and the Panthers led 18-0 with 9:27 to play in the opening quarter.

Two minutes later, Johnson was once again standing in the end zone, this time after barreling his way in from 4 yards out following a blocked punt by senior linebacker Quanterrius Pressley. Johnson added the two point conversion and Georgaian led 26-0.

That’s when Georgiana’s defense decided to get in on the action. Williams snagged a Florala pass and sprinted 50 yards down the sideline for a score. Stallworth added the two-point conversion for a 34-0 lead.

Junior defensive lineman Rashaun Lewis added the second defense score when he scooped up a fumble and rumbled 15 yards for a touchdown with 6:22 to play in the first half.

Stallworth found sophomore Chris Mixon for the two-point conversion and a 50-0 lead.

The final score of the game came with 1:31 to play in the second quarter when freshman quarterback Cleandrea Walker hit sophomore Martavius Payton for a 10-yard touchdown.

Georgiana will be back in action next Friday when it travels to Kinston High School. Kickoff is set for 7 p.m.