Eagles down Wilcox, improve to 2-0 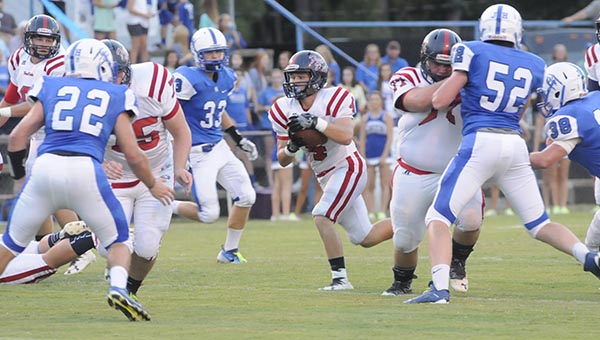 For two quarters, Fort Dale Academy dominated the ground game, the clock and ultimately the scoreboard against the Wilcox Academy Wildcats.

But as it turned out, the Eagles wouldn’t need a second half as their comfortable 27-0 halftime lead proved enough to hold the Wildcats at bay.

Fort Dale running back Clay Mansmann was the first to strike, capping off an 11-play, 52-yard drive.

With only 6 second remaining in the quarter, the second Eagle found paydirt as running back Andrew Salter barreled into the end zone on an 8-yard touchdown run. The second drive ate up not only another 8 plays and 72 yards of real estate, but it also dug into critical response time for the Wildcats before the Fort Dale lead got out of hand.

The second quarter proved more of the same as quarterback Luke Taylor extended the lead to 20-0 on a 10-yard keeper.

Taylor then connected with Trey Coker for a 15-yard touchdown pass.

Fort Dale head football coach James “Speed” Sampley said that the strong start in the first half set the tone for the entire ballgame, including his second string’s strong defense that held the Wildcats at bay in the second half.

“Everybody played, and we got some good experience,” Sampley said. “It was just a good game overall.”

A cornucopia of Eagles contributed to Fort Dale’s offense Friday, with Zach Kendrick leading all Fort Dale rushers with 61 yards on 6 carries.

Taylor was 8-for-11 passing for 94 yards, and Coker proved his favorite target with 28 yards on 2 catches.

The Eagles will host their first home game, and first region contest of the season, next Friday against the Pike Liberal Arts Patriots.

“We’re going to have to play consistently, cut down on the mistakes we’re making and tackle better,” Sampley said. “But overall, we’re making progress.”

The Eagles and Patriots will square off at 7 p.m.