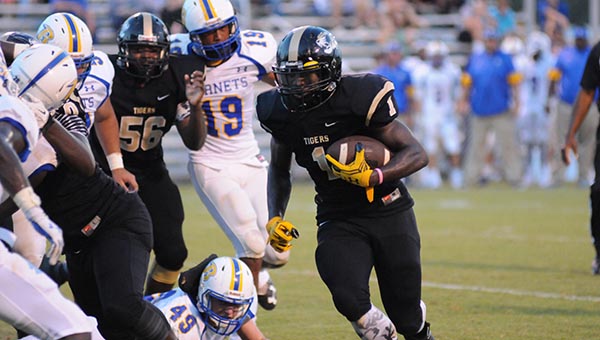 After a series of early miscues that saw the Hornets (1-0) fumble the ball away on their first two possessions of the game, Beauregard got on track by pounding the Tigers with a heavy dose of their ground game that was spearheaded by the junior duo of Jacob Calloway and Ladamian Webb.

Calloway scored on runs on 36 yards and 21 yards, while Webb added scoring runs of 30 yards and 12 yards.

Calloway’s first score, a 36-yard sprint through the Tiger defense, tied the game at 7-all with 2:32 remaining in the first quarter. His running mate helped put the Hornets ahead just two minutes into the second quarter with a 12-yard scamper.

They would not surrender the lead.

Greenville took advantage of the early Beauregard turnovers to notch its lone score of the game.

After recovering a Beauregard fumble at the 40-yard line, the Tigers marched down the field and a pass interference call set them up with first-and-goal from the 4-yard line.

Senior Dedric Owens pounded the ball down to the 1-yard line before senior quarterback Brandon Simmons snuck into the end zone with 3:30 to play in the opening stanza.

Senior Joseph Price added the extra point for a 7-0 lead.

Greenville wouldn’t score again until 1:49 in the fourth quarter when senior linebacker Jonathan Gordon blocked a punt and scooped it up nearly in the same motion and raced into the end zone.

After the game, second year head coach Josh McLendon urged his team not to spend too much time dwelling on the loss.

“This is not going to make or break our season,” he said. “This is just the first step of many steps that we have to take to be successful. We need to grow up as a team. We’re going to go back to work and try to get better.”

The Tigers (0-1) will have an off week before they travel to Troy Sept. 9 to take on Charles Henderson High School.