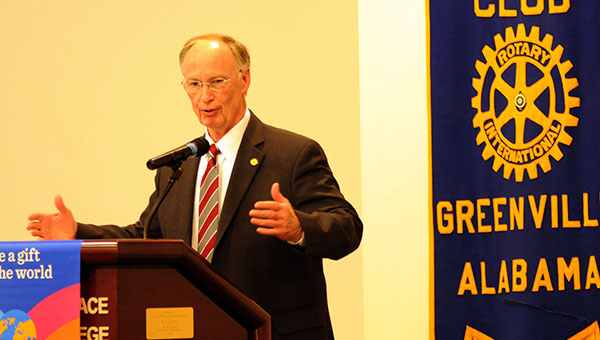 Gov. Robert Bentley announced this week plans to call a special session to consider a proposal for a lottery. (File photo)

Gov. Robert Bentley announced this week that he will call a special session to consider a proposal for a lottery.

Bentley said the revenue generated from a lottery could help fix the state’s persistent problem with funding state services.

He said a lottery would raise about $225 million a year, which he is proposing be applied to the General Fund, which provides the money for Medicaid, the Department of Corrections, the state’s health departments, public safety, the Department of Mental Health and many more.

“We find ourselves as a state today, staring at a last, best option to pay for the most basic services a state must provide,” Bentley said. “At bare minimum, we must care for our truly vulnerable. With no steady revenue stream to fund basic health care for babies born into poverty, or to help our people who have disabilities get the care they need to live a productive life, we are left with the gut-wrenching decision to cut these services, or find a way to pay for them.”

“Alabama’s hospitals welcome the Governor’s announcement that he will be calling a special session to address the state’s critical funding shortages,” said Donald E. Williamson, MD, president, Alabama Hospital Association.  “Programs, such as Medicaid, that are critical to the state’s infrastructure and economy cannot continue to be supported with one-time revenue patches, and cuts to the already bare-bones program are unsustainable.  We agree that a long-term funding source must be identified and are interested in any solutions for additional revenue, including the exploration of a lottery.  However, until the details of a lottery proposal are known, our Association’s position is that we support the concept of a lottery and the right of Alabamians to vote on it.”

Bentley said the state can no longer continue putting band aids on the state’s revenue problems.

“We have gotten to this point as a state, because we have skated by year after year by finding one-time money to pay for things,” he said. “It’s like taking your tax refund check to pay this month’s bills. Once that refund is spent, you still have to come up with a way to pay next months bills.

“And we’ve been pretty good at getting by. First, when I was elected, we started cutting wasteful spending.  We went right at state government with a hatchet, so much so that we actually saved taxpayers over a billion dollars annually. And then, in 2012 we actually asked you, the taxpayers to let us go in debt to pay our bills. And you voted yes, and allowed your state government to borrow over $400 million dollars. Like any ‘one-time money’ quick fix, that money is gone. And what’s more, we have to pay it back. … The time has come for us to find a permanent solution. This solution will provide funding that we can count on for year after year without ever having to raise your taxes or put one more band aid on our state’s money problems.”

Sen. Quinton Ross said he is in favor of Bentley’s decision to call a special session to consider a lottery.

“We are pleased that the governor has decided to entertain legalized gaming after Democrats have been pushing the issue for years,” said Alabama Senate Minority Leader Quinton T. Ross Jr. (D-Montgomery).  “We need to legalize and tax our existing gaming facilities, as well as create a statewide lottery so our state can adequately fund and expand our struggling Medicaid system and properly support our underfunded educational system. These gaming dollars can provide stability and long-term economic streams for many of our General Fund and Education Trust Fund needs.”

Ross said it’s time the state began to benefit from the money Alabamians have been spending on lottery tickets in other states.

“We need to benefit from the millions of dollars spent by Alabamians who patronize other states through their gaming facilities and lotteries; and we agree with Gov. Bentley that it is time to allow the people of Alabama to decide the issue once and for all by allowing them to vote,” Ross said. “With the governor’s lead, I hope our Republican colleagues will finally support and approve gaming for Alabama.”

Bentley has for years stood in opposition to a state lottery.

In January, when Alabamians were driving to neighboring states such as Florida and Georgia in hopes of winning a portion of the record  $1.6 billion Powerball lottery, Bentley told the Rotary Club of Greenville that he remained opposed to the lottery.

“I think gambling is a poor way to fund government,” Bentley told Rotarians. “I’ve always thought that. I think we ought to step up to the plate and pay for what we have.  I don’t think we should do it on the backs of the 30 to 40 percent of people who tend to gamble the most. Having said that, that’s what I believe, but I also believe in the peoples’ right to vote on issues. If the people of Alabama want to vote on a lottery, for instance, I’m not opposed to that and never have been opposed to that. I just think we all ought to pay for what we use. If we drive on a road, we ought to pay gas taxes. If we use services in the state, we ought to pay for them. And if you use services, you ought to pay for them and not ask everyone else in the state to pay for them. Even though I am not a supporter of the gambling, I am a supporter of the peoples’ right to vote on issues.”

Bentley announced on Friday that the special session will begin Aug. 15.