GHS reloading on the field, sidelines 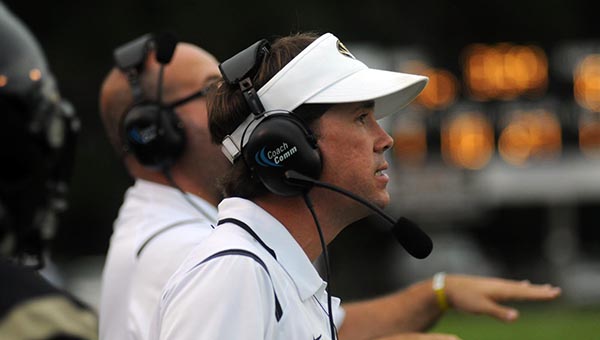 The Tigers lost six starters from an offense that averaged 31.9 points per game last season and helped power Greenville to the second round of the playoffs.

An even more staggering number is that the Tigers lost 10 starters from a defense that allowed just 13.3 points per game and helped lead Greenville to an 11-1 mark in 2015.

Some coaches would consider 2016 a rebuilding year.

“We lost a lot from last year,” McLendon said. “We had a great senior class. We had 25 seniors last year. I won’t say we’re in a rebuilding phase. We’re reloading. We have the talent. We’ve got the athletes. It’s just getting some experience.”

Entering the 2016 campaign, McLendon wasn’t just faced with replacing arguably one of the most talented defenses in school history, the coach also had to scramble to fill his defensive coordinator position.

John Jones who helmed the defense in 2015, resigned earlier this month to join Bill Clark’s staff at UAB.

“We were faced with a little adversity the last few weeks with our defensive coordinator resigning and taking a job at UAB,” McLendon said. “His goal was always to be a college coach and Coach Clark called him and offered him a job up there. It was terrible timing for us, but it was something he felt like he needed to do.”

The move left McLendon with two choices. He could either hire a coach that already knew the defense or make a drastic change just weeks before the season.

“I was pretty stressed out for about a week,” McLendon said. “You don’t want to be changing defensive coordinators at the end of the summer. To be honest, I kind of went into panic mode, but (GHS Principal Joseph) Dean and (Superintendent Amy) Bryan did a great job of letting me go out and hire who I needed to hire.”

In 2014, under Newton’s leadership, the Greenville defense was nearly as stingy as the 2015 Tigers. Greenville allowed just 14.9 points per game, scored a shutout against perennial powerhouse Eufaula High School, and helped Greenville advance to the third round of the playoffs.

“He knows the defense,” McLendon said. “It’s the same defense he was coaching when he was here before. I feel like that’s a great hire for us. Not only is he a good coach, but it also doesn’t change anything for us on the field. The fall isn’t the time you want to be changing anything on offense or defense. It’s the time you want to be game planning for your opponents. You want to do all your changing and teaching in the summer. We were lucky to find him and he was eager to come back to Greenville.”

Despite all the changes, McLendon has high expectations for the 2016 season.

“There are a lot of challenges, but I feel like our young men are resilient,” McLendon said. “… We have a good group of young men. They are doing exactly what we ask of them. We’re excited about the season. I feel like we’re going to have another good year.”

Fans will get their first chance to get a glimpse of the new-look Tigers Aug. 18 when Greenville plays host to Stanhope Elmore in a preseason contest. The game is slated for a 6 p.m. start at Tiger Stadium.