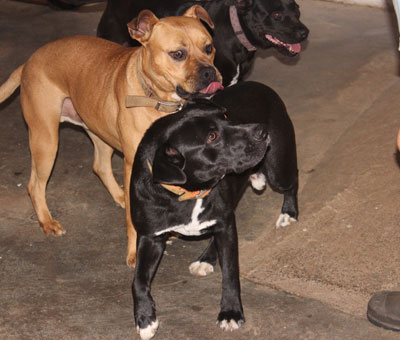 Members of the Animal Tails Rescue group care for animals dropped off at the facilty, but the group currently does not have a legitimate place to house strays brought to their doors.

In the most recent Crenshaw County Commission meeting, Kim Kent of the Animal Tails Rescue shelter questioned the commission about their current provisions for the county’s stray animals.

Crenshaw County Commission Chariman Charlie Sankey, Jr. said that if a stray is picked up outside of Luverne, Rutledge and Brantley city limits the county commission office should be called and a commissioner will approve the animal to be taken to a facility in Troy, Ala.

“It isn’t the best solution in the world,” Sankey said.

“But, it is the only thing we can do being that we don’t have a local veterinarian for them to be taken to.”

Dr. Althea Gammage of the Crenshaw Animal Clinic had previously accepted the county’s strays. Gammage stopped taking strays in the fall of 2014.

“It became too much for my private practice,” Gammage said. “I didn’t have the room, the time or the money.”

Gammage said that Crenshaw County does have a stray problem, because there are not a lot of responsible owners.

“People bring us cats, and ask us to take them,” Kent said.

“The animals are clearly sickly and need help.”

The commission has a $6,000 allotment a year for animal rescue services. The commission agreed that it would be better for residents of the county to have a local facility to take in stray animals.

After a private meeting, Kent and Sankey formed a plan for the possibility of Animal Tails Rescue becoming that facility for the county.

“We will present our plans at the next County Commission meeting.”

Kent says that Animal Tails is well equipped to take the county’s strays.

“Anyone is welcome to tour our facility and see how we operate,” she said.

Animal Tails Rescue has been in operation since April 2015. It is located at 466 Mount Ida Road in Luverne. They currently offer cat/kitten adoption for $75 and dog/puppy adoption for $100.