Hilburn named Citizen of the Year at Chamber banquet 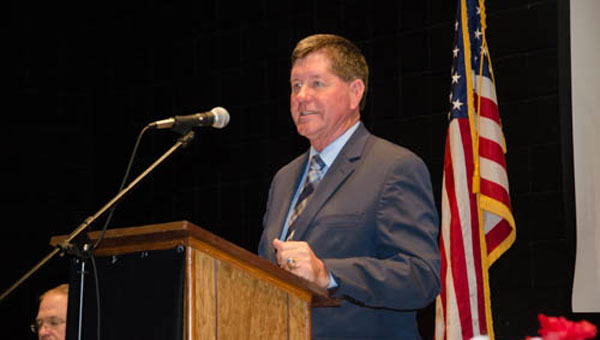 Pictured is Ray Hilburn accepting the Citizen of the Year award at the annual Chamber banquet. (Submitted photo)

At the recent Crenshaw County Chamber of Commerce banquet, the Citizen of the Year award was bestowed on Ray Hilburn, a citizen who truly demonstrates what it means to give back to the community.

“It’s very humbling. It’s not the award that means so much, it’s the people that came and the things they had to say. That means more to me. Don’t get me wrong, the award is nice, but I’m not out to get awards. It’s the sentiment behind it, that people and friends think that much of you. That’s what makes me proud,” said Hilburn.

Hilburn was born in Luverne on Dec. 9, 1955, and is the youngest of five boys. He graduated from Luverne High School in 1974 and from Auburn University in 1978. He attained a bachelors of science degree in poultry science.

After Hilburn graduated from Auburn, he began his professional career with ConAgra Poultry and worked there for three and a half years. In November 1981, he accepted a position with the Alabama Department of Agriculture and Industries (ADAI).

After 29 years of service,  Hilburn retired from the ADAI. The following day, he began working for the Alabama Poultry and Egg Association as the director; he is currently employed in this position.

“Though it is not intended to be a lifetime achievement award, most past recipients have contributed to the community many years prior to winning the award and many still contribute to the community in meaningful ways each year.”

The night was filled with friends, family and co-workers all coming together to share stories about Hilburn and the part he has played in their lives throughout the years. Hilburn was especially proud to see the turnout, and was honored to know that so many in his community thought so highly of him.

“I’ve always been very involved with everything, even when I was in high school here in Luverne. I don’t hunt, I don’t fish, I don’t play golf; I love people. I just like being around people. I’ve been blessed, and truly I don’t deserve that, but I just enjoy people,” said Hilburn.

“I’m not perfect, but I am blessed. I couldn’t ask for a better family.”

According to Nix, Hilburn was nominated by board member Al Snellgrove. Based on Hilburn’s contributions to the community and overwhelmingly positive resume, the Board of Directors made the choice to select him.

“I’ve just had a lot of family and friends that’s helped me a lot. I’ve never done anything on my own, I’m not that smart. But I will get something started, and I don’t mind asking people to help me. I can’t say no to somebody, but then I don’t do it by myself, I ask other people to help me. I’ve been blessed that nobody ever tells me no,” said Hilburn.

Hilburn continues to serve the community of Crenshaw County in youth athletic groups, numerous civic and professional boards and is an active member of the Rutledge United Methodist Church.