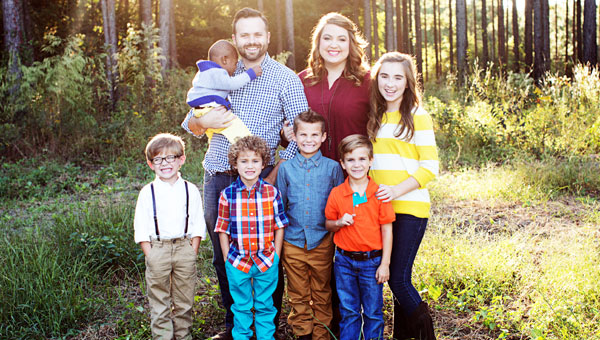 When Luverne native Jay Baugh Houston first discussed the idea of adoption with her husband, the couple never expected that their party of four would soon grow twice its size.

Houston started at Luverne High School in the first grade and attended for the rest of her high school career. After marrying her husband of 13 years, the couple moved to Albany, Georgia, where she pursued her passion of becoming a baby and wedding photographer.

“I was adopted, so that was something that I knew I always wanted to do, but my husband was not adopted and didn’t really know anyone who was adopted. So, that was not on his radar at all. Basically, I had to pester him about it for a few years,” said Houston. After discussing the matter with her husband over a period of time, Houston decided it was time that she turn to the Lord for guidance.

“At that point, I decided that I was going to talk to the Lord about it, so I did just that,” she said.

“I prayed about it for about three years, and literally one day in the car my husband said I want to have more kids, I think we ought to adopt.”

By this point in time, their first child was six years old and their son was about to be two. The couple started the process of adoption by contacting their local Child Protective Services (CPS) office.

“When we signed up, we just decided that we already had a six-year-old, we already had a two-year-old and the Lord had been good in giving us babies. There were a lot of families that didn’t have babies, so we wanted older kids. We didn’t really have any parameters,” she said.

“Basically, we just told the Lord and the people at CPS whatever they wanted to send us, we would say yes.”

The couple reviewed and accepted each file regarding an older child that was sent their way, but each time the children were sent to other homes. In November of 2012, the couple received information regarding three young boys.

“There was just something about them. When I saw them, I said these are our kids,” said Houston. To the dismay of the couple, the children were assigned to another home, but Houston never stopped praying for the well being of the boys. 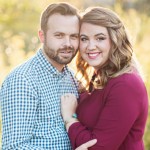 George and Jay Houston have been married for 13 years.

“So, I made their picture my lock screen on my phone. I was sad and happy at the same time that they had found a family, and that’s the whole goal of it anyway. It’s not to find the right child for your family, it’s to find the right family for the child.”

The couple continued to wait patiently for an adoption to come through, and Houston continued to pray for the boys and their new family. By the time February 2013 came around, Houston still had the picture of the boys set as the lock screen on her phone.

“My husband told me I needed to take the picture off, and I said I’m not praying for them to come to our house, I’m just praying for their transition and their hearts,” said Houston. “The next day around three o’clock, our case worker called and said she needed somewhere to place the boys immediately and could she bring them to me? I said yes, obviously. Their adoption was finalized that August.”

The family of four instantly grew to a family of seven. While the growth of the family did take some getting used to, Houston knows it was one of the best decisions the couple has ever made. The transition of the family helped Houston and her husband grow to be more organized individuals, and it also challenged them to make a conscious effort to keep growing their relationship as husband and wife.

Being a child of adoption, Houston understands first-hand why the process is so important.

“I see what my life would have been, and I am so grateful for what it is now. I know that was one hundred percent because I was adopted. I especially loved growing up where we did. If I could raise my kids in Luverne, I would do it in a heartbeat,” said Houston.

To some it may seem like the Houston house was already full to capacity, but the couple still felt the Lord calling them to continue to open their home and their hearts to the possibility of more children.

“We knew that we wanted more kids, and there’s a verse in the Bible that talks about children are like arrows in the hands of the warrior, blessed is the man whose quiver is full. The word full just kept jumping out at me because our house was not full. That’s kind of where we were led to keep going with kids,” said Houston.

The couple had just begun searching through another adoption agency, when they received a call from a friend who had recently adopted as well.

“She said, Jay I just found out that my boys have a little brother, but I can’t take him. We prayed about it and talked to people and we decided we would pursue that,” said Houston. “It was crazy. Things that should have taken a year to process only took a few weeks. There’s no question in my mind that he is right where the Lord wants him to be.”

The couple knows that the work that goes into raising and taking care of her children is a team effort and could not be accomplished without the help of dedicated friends, family and babysitters.

The couple has been asked many times whether or not this marks the end of their journey with adoption, but Houston still clings to the Bible verse about their quiver being full.

“It’s really true that the Lord will not hand you something and then make you fend for yourself. We have people tell us all the time that these kids are so lucky or these kids are so blessed. These kids are not lucky or blessed, we are. What they taught us about love, trust, faith and compassion, my husband and I are really the blessed ones. There’s nothing lucky that comes from losing your parents. We’re blessed to have each other, but we are the lucky ones.”