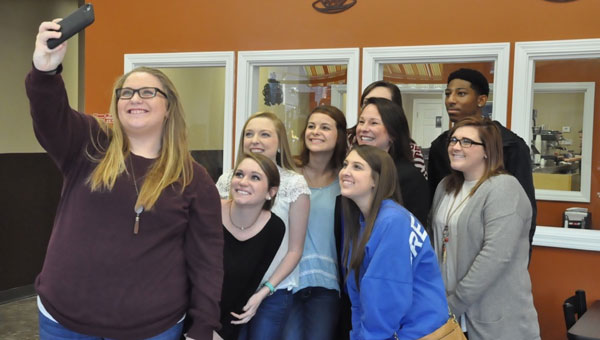 U.S. Representative for Alabama’s second congressional district Martha Roby paid a visit to the Friendliest City in the South just this week.

Roby served as the guest speaker for the Luverne Rotary and Kiwanis Clubs at the Luverne United Methodist Church Dei Center.

Roby is currently in her third term serving Alabama and worked as an attorney before seeking a position in politics.

Roby shared her thoughts with the group on the “highs and lows” that were going on in Washington at the end of last year. Her main focuses regarded the bill that replaced the No Child Left Behind Act and the authorization of the Highway Trust Fund for a five-year period of time, as well as her work with the Veteran’s Administration.

“For those who work in local governments here in the county or city, having certainty in federal funding for federal infrastructure projects is imperative. Since I’ve been in Congress, we’ve been going to one short term fix to the next, and there was uncertainty,” said Roby.

“I was able to get language in that replacement bill to No Child Left Behind that returned control to our state and local governments to making the decisions regarding our children. The language went a little bit like this, the federal government can no longer coerce states into adopting any curriculum or standard with money. The Wall Street Journal said that this was the largest return of federal control to the states that they had seen in 25 years.”

The VA Medical Center Recovery Act bill that Roby recently made has already been passes by the U.S. House of Representatives and will now go on to the Senate.

“We have seen improvement, but we still have a long way to go. We recently had a round table in Montgomery where I brought together hospital administrators and private practice physicians with top leadership in the VA out of Atlanta to say you have a problem here,” said Roby. “I have told the director out of Atlanta that she cannot complain to me about a poor showing in the community for a willingness and a desire to see our veterans when the VA will not pay their bills.”

After her speech, she also took the time to go to Luverne’s local coffee shop and speak to the Chamber Belles and Beaus. She offered an open floor for questioning and told the students that she would answer any questions they had as openly and honestly as she could.

While speaking to the students, she recalled the story of how she got involved with politics and how it has affected her life thus far.

Her interest in returning to Alabama was first piqued when she attended her brother’s high school graduation.

The speaker for the event stressed the importance of students growing up in Alabama coming back to help the state grow and flourish, and those words struck a chord with Roby. It was then that she decided she would move back to Alabama and begin practicing law.

“The challenge was to come back and give back to the state that’s given you so much. My husband and I heard it loud and clear. Little did I know that two years after we were married I’d be running for city council,” she said.

Roby encouraged the students to pursue their dreams, whether these dreams seemed farfetched or realistic, and to set specific goals and write them down.

She also praised the community of Luverne for the amount of support it gives daily to its students.

“Keep your eyes open, because you never know when an opportunity that wasn’t on your plan for life may jump right out in front of you. That’s what happened for me,” she said.