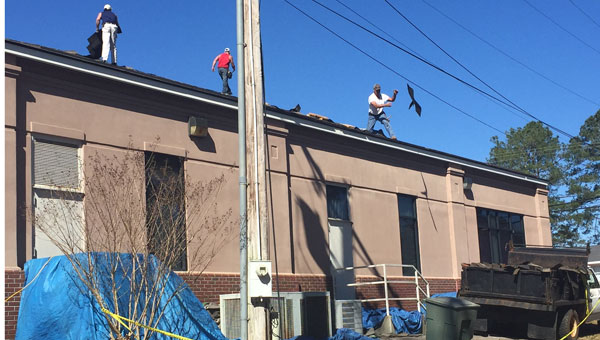 The Luverne Public Library will soon be the proud owner of a brand new roof by way of local roofer Jeff Warren and his company.

The City Council discussed the matter at previous meetings, and ruled that it was time that the old roof be replaced. The library was established and built around 1997 according to Kathryn Tomlin, director of the Luverne Public Library, and while the original roof has held up for almost 20 years, recent leakages have spurred the library staff to request repairs. Tomlin is excited about the project and is ready to see the finished product.

“From what I’ve heard, Jeff has a really good reputation and everybody’s been really pleased with what he’s done. We’re just happy to get it done, and I’m hoping it will last us a long time,” she said.

Tomlin has considered requesting a new roof ever since leaks began showing up about three years back. There have been two different areas in the building affected by leaks, and one area near the children’s center gave way, leaving a large opening in the ceiling.

“There’s another roof up there, about three or four feet higher, that was a joint of the sheetrock. We were so horrified that the joint was going to give way, because that’s where it was leaking down. Once the roofers started getting up there looking to get estimates, they realized how bad the roof really was,” said Tomlin.

Repairs on the roof started last Thursday to replace the entire roof with new architectural shingles, which, according to Tomlin, are said to have a lifespan of 30 years or so. So far, the construction has not deterred every day operations of the library, and staff members are working to maintain children’s events and activities, while keeping children clear of the construction areas.

“They’ve been very cautious about what came off the roof and what they leave. They have tarps on the group and in the bushes,” said Tomlin. “It hasn’t slowed us down; it just gets noisy sometimes but that’s just part of it.”

Tomlin is unsure how long the repairs will go on, but she is more than happy to patiently wait for the finished product.

After the extreme Monday night weather experienced by citizens of Crenshaw County, structures such as this chicken house on Jones... read more