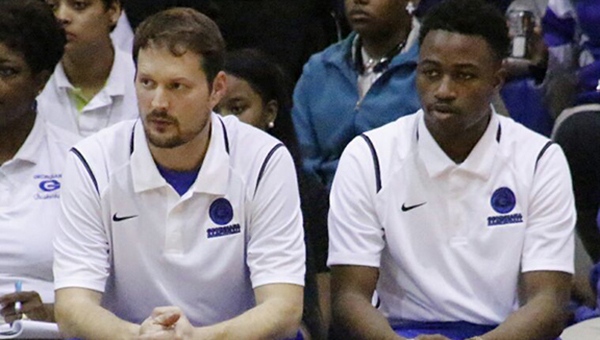 Nineteen-year-old Matt Campbell (right), a 2014 graduate of Georgiana High School, has served as the right-hand man of Georgiana head basketball coach Kirk Norris (left) since he was in seventh grade. (Courtesy Photo)

Many notable athletes have left their marks — in literal and figurative terms — on Georgiana’s hardwood floor.

But perhaps one of the most recognizable faces with the Georgiana basketball program has made his biggest contributions on the sideline.

Nineteen-year-old Matt Campbell, a 2014 graduate of Georgiana High School, has served as the right-hand man of Georgiana head basketball coach Kirk Norris long before he fit the description of a man.

Inspired by the play of his older siblings, Campbell took it upon himself to try out for the junior varsity squad as a seventh grader.

Unfortunately, a heart condition prevented him from partaking in the strenuous activity that a full season of basketball would require.

“And so I told Coach Norris I wasn’t going to be able to try out,” Campbell said.

“But he said ‘well, how about you just come on as one of my managers and just help me out?’ And I told him I’d love to do that.”

Despite his newfound position as manager, it was still frustrating that he wasn’t able to participate in the same capacity as his friends.

“I knew that I would’ve been successful being under Coach Norris, and so it hurt to know that I wouldn’t be able to show my talent or play with my friends,” Campbell said.

Still, Campbell has arguably contributed just as much to the Georgiana basketball legacy from the sideline as a manager and, eventually, as an assistant coach.

During his junior year, Norris promoted him to a student assistant position.

Thanks to his previous years as a manager, he knew exactly what the job would entail.

His responsibilities were widespread — he was the go-to guy when Norris needed files, he helped tape up injured players and he did everything from washing clothes to helping create highlight films for Georgiana’s college-bound players.

And none of it would be possible if Campbell himself didn’t still harbor a great deal of enthusiasm for the sport.

That same passion allowed him to return to the position even after he’d graduated from Georgiana.

“(Coach Norris) knew that I was going to Lurleen B. Wallace Community College, because I was going to go to a four-year college, but I decided to go to LBW to get my basics out of the way,” Campbell said.

“And so he knew that I had so much experience with him and I knew what to do from being there from 7th grade to graduating.  He knew that I knew so much about his program, so he asked if I wanted to take my coaching test and start helping him out more.”

The test to become a certified coach took nearly a month of preparation, and the whole ordeal ended up being more demanding than he originally thought.

“I thought it would just be simple questions, but there were videos and lessons … there was a lot to learn about being a coach not for yourself, but for students, too,” Campbell said.

“And not only for a sport, but for academics, personal reasons and whatever else they need.”

As a credentialed 19-year-old coach, Campbell still gets mistaken for a student, often to hilarious results.

“If I go to a game to watch another team play to get information, I fill in my coaching card to get in the game and they ask ‘is this real?’” Campbell said.

The credentials are good for more than the occasional laugh.  A 19-year-old with eight years of experience is a valuable commodity, and he believes that the extra résumé padding was another reason Norris asked him to return after graduating.

Gradually, and oftentimes without him realizing it, Campbell’s hobby had become a profession.

When he does transfer to a four-year college from LBW, it’ll be to pursue his dream.

“If I don’t do coaching, I’ll do sports medicine.  But it’ll more than likely be coaching, because I know so much and I have so much experience, so why not just keep coaching and be successful? Because I already know what to do and how to win from being under Coach Norris.”

Norris said that the prospect of a season without Campbell at his side is tough to consider.

“I’m not sure I’ll have him after this year, and it’s going to be a big loss because he’s been real good for me,” Norris said.

“He’s learned a lot and has been with me so long that he works with my guys at practice. He’s a really good kid.  And to be honest, he’s like a son to me.”

Campbell said that the feeling was mutual.

“He didn’t only teach me about basketball and coaching — he also teaches me about life goals and anything I need to know.  Anything I needed help with, he was always there for me.  Even if he would go somewhere with his family, he’d call me every now and then and ask if I wanted to ride with them.  He’s not only a coach or somebody I work with, but he’s like a father figure because whatever I needed, he was there for me.

“He’s really opening so many doors for me because I know that when I transfer to a four-year school, it’ll be easier with them as a grad assistant because I’ll have eight years of experience.  That, too, is a blessing, and that’s why I really appreciate and respect him so much.”