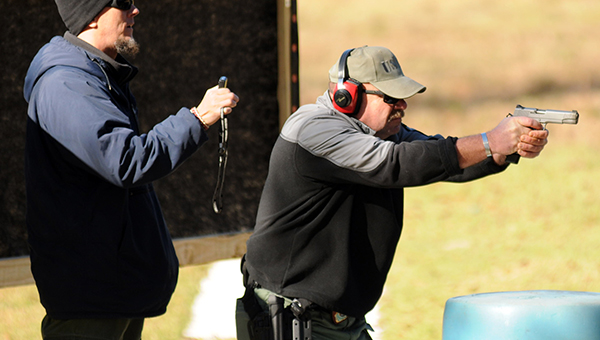 Shots rang out and cut through the silence of the morning air on Friday as law enforcement officers from agencies across the region gathered at the Greenville Police Department’s firing range to take part in the 7th annual Steel Challenge.

The event, which is sponsored by the Greenville Police Department’s Special Response Team, pits local, state and federal officers against one another in a timed shooting competition across a variety of courses.

Mason finished the course with a time of 48.33 seconds on his first run and 65.96 seconds on his second run for a total time of 1:14.29. Mason’s time included 30 seconds in penalties for three missed targets.

“He was almost five seconds better than the next best shooter,” Lovvorn said.

In order to be eligible for the Top Gun competition shooters had to finish in the top three of the first three events.

In the “Falling W” competition, shooters had to knock down five targets shaped like a “W” and then hit a stop plate 15 yards back from the final target.

The final course was a head-to-head competition that pitted the shooters against each other in a timed event. Each shooter had to knock down a row of plates and then hit a stop plate.

Twenty officers from the Birmingham area to the panhandle of Florida competed in Friday’s competition.

“About half of our shooters are guys that come back year after year,” Lovvorn said. “They seem to enjoy it. It’s a fun way for those guys to get some time in on the range.”

Along with the competition for law enforcement, a contest for event sponsors is held. The sponsors shot the “Falling W” course.

The event, which is held at the GPD’s gun range, helps raise funds for equipment and training for the GPD’s Special Response Team.