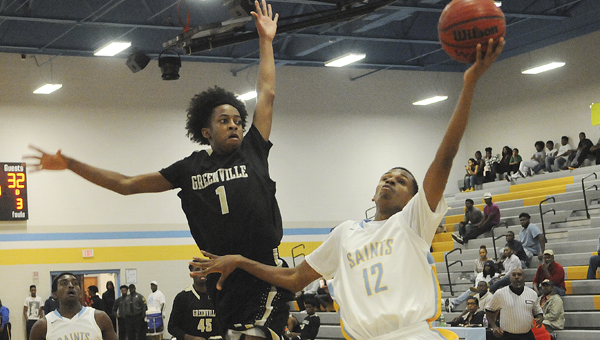 The Greenville Tigers were thrown into the deep end during the Thanksgiving holiday as the team braced for a Selma High School-hosted Thanksgiving Shootout Tournament with only a week of practice under their belts.

But the Tigers emerged in second place with an 84-64 win over Fairfield of Birmingham on Wednesday, a 68-65 win against Francis Marion on Thursday and a 49-46 loss to Selma High on Friday.

Despite not coming home with the gold, Greenville head basketball coach Kelvin Lett was pleased with his players’ opening performance of the season, considering the opposition they faced.

“I think we played pretty well, considering we only had one week of practice and no one’s in real basketball shape,” Lett said.  “And every team we’ve played against had already played at least four games.

“It was a high level of competition.  Most of those teams had only lost one game—I think Fairfield was 4-1 when we played them, Francis Marion was either 3-1 or 4-1 and Selma was 5-2, so those are some winning programs.”

Greenville and Selma were neck-and-neck with three minutes remaining in the fourth until a pair of free throws and a transition layup put the Saints ahead 48-44.

Char’Darrius Davidson was sent to the free throw line with 3 seconds left on the clock. Things got interesting when he knocked in the first and missed the second shot, which was tipped out to an open Charles Warren for a three to send the game into overtime.

Though the shot missed its mark, Lett said that the tipped-out free throw was indicative of some strong rebounding that the Tigers displayed throughout the tournament.

“We’re a strong rebounding team right now, and our defense is pretty good considering the fact that none of these guys have ever played together before,” Lett said.  “Our defensive rotation seems to be coming together faster than our offense.  It’s hard when someone gives you a playbook and you have one week to learn them.

“And then being in the right position at all times gets a little frustrating.  But I just try to make sure that they stay positive and we’ll keep working on those types of things so we can build on them.”

The Thanksgiving tournament also afforded Lett an opportunity to see his all-new starting five’s team chemistry in practice rather than theory, and he said that tough there’s still plenty of room for improvement, he’s pleased with the foundation that’s been laid in a relatively short time.

“We’re definitely lacking team chemistry because we didn’t return any starters,” Lett said. “And it’s just the fact that we have a lot of guys who haven’t really played at this level of competition before.  You can see it in the way that we perform in certain parts of the game, especially when it came to crunch time.  We didn’t understand time (management) in situations as well as we’ll be prepared later on in the season.

“It was a good test to see what we’re measuring up to right now, and I think we can build on what we did this weekend.  It was definitely a good experience for the players.”

The Tigers will host Hillcrest-Evergreen Thursday for the first home game of the season, followed by Luverne at home on Friday.

Basketball season is right around the corner within the halls of McKenzie School, and both the girls and boys varsity... read more