Three on a String delights audience 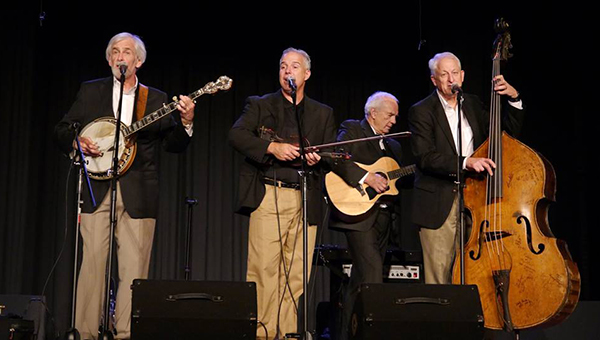 After almost 45 years of entertaining audiences with its mix of excellent musicianship and side-splitting humor, Three on a String is still going strong.

The Birmingham-based trio delighted their Camellia City audience Tuesday night at the Ritz during a performance that earned them an enthusiastic standing ovation.  The performance was second of four shows making up the Greenville Area Arts Council’s 2015-16 season.

“Just a great show! We had a blast,” said Naomi Pryor, who attended the concert with husband Chris, Greenville Middle School’s band director, and their two budding musicians Jacob and Laun.

Jerry Ryan, a 28-year veteran of the band who serves as its jovial emcee as well as performing on guitar and harmonica (or “choking the harp” as he calls it), his son Brad, the band’s “temporary” bass player/fiddler for more than 26 years and an established theme song and jingle writer in his own right and Bobby Horton, banjo player, trumpeter, and renowned music historian, shared more than the toe-tapping bluegrass tunes such as “Orange Blossom Special” and “The Devil Went Down to Georgia” for which they are famed.

Former bandmate Andy McGinnis joined the trio and turned it into a quartet for several numbers, performing some of his own original compositions.  Comedy routines featuring the fictional denizens of Holly Pond provided lots of laughter for all ages of audience members.

The band will be celebrating its 45th anniversary Aug. 6, 2016, with a special concert featuring 20 of its past and present members at the Alabama Theater in Birmingham.