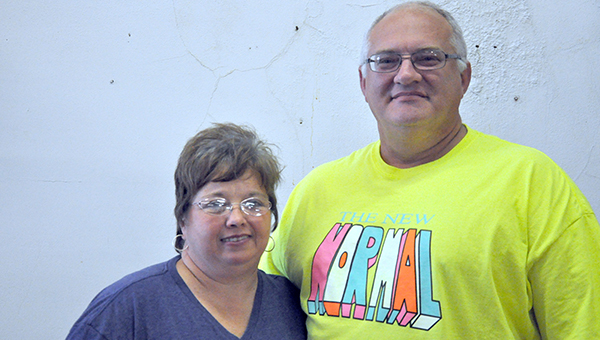 Angie and Leon Hall have served as foster parents to over 250 children over the past 20 years, and they have no plans to stop anytime soon. The couple has also had the opportunity to adopt three children who originally were fosters with the Hall family and are in the process of adopting two more. (Journal Staff/beth Hyatt)

November is known as National Adoption Month, but to those who have never had anything to do with the process of adoption, it can all seem like just another month. For Angie and Leon Hall, adoption and fostering children in need is not something they practice only one month out of the year, but instead on a daily basis. The couple married 31 years ago, and began their journey into the world of foster care 11 years later. The Halls have always had a heart for children, and once they began a family of their own that love began to grow more than they ever imagined.

“We’ve always taken care of children and we are youth pastors, so we’ve worked with kids almost the entire time we’ve been married,” said Angie Hall. The two serve as youth pastors at Faith Walk Ministries in Luverne, and also work for the Crenshaw County School System at bus drivers. As it can be seen, every aspect of their lives revolves around spending time with children whether it be in their home, in their church or even on the job. “We were told that our hearts were bigger than our heads,” said Leon Hall.

The Halls have three birth children, three adopted children and have fostered a combined total of over 200 children over the past 20 years. They are also currently in the process of adopting two sons.

At their 25th wedding anniversary party, the family crunched the numbers and found that the couple had fostered a total of 225 children, many of who were attending the festivities that day. The couple still remains in contact with many of the children they have fostered over the years, and has even had the opportunity to meet some of the children of those they once fostered.

The Halls have a deep love for children and have proven this love time and time again by opening their home to those children in need. Their ultimate desire is to one day see a children’s home open in Crenshaw County, and to see more families open their homes to foster care. “There are so many children that need homes; it’s just needed desperately,” said Angie Hall.

The couple continues to strive to be positive influences on the children coming through their home, and they pray that one day these children may become foster parents themselves. “Hopefully we have made an impact to where the ones who have been in our home will maybe grow up and follow in our footsteps,” said Leon Hall.

One of the Halls’ favorite memories they’ve shared with their children comes in the form of family vacations. Each year, the group takes a trip as a family and this year is no exception. It is important to the Halls that each child in their care receives the same love and attention as their birth children, and that they are given every opportunity to succeed and have a memorable childhood. When asked what his favorite part of being a foster parent is, Leon Hall said, “Seeing a kid that wouldn’t have had a chance and making a difference in their life.”

As it goes with parenthood, the road has not been easy and has proven to be challenging at times, but the couple would not trade their years together for anything. They have also found that this avenue of foster parenting has given them many opportunities to share their faith with those around them.

“We’ve seen a lot of people come to Christ, and that’s been a blessing. It’s been more than rewarding,” said Angie Hall. “We love it, it’s fulfilling and that’s just our heart.