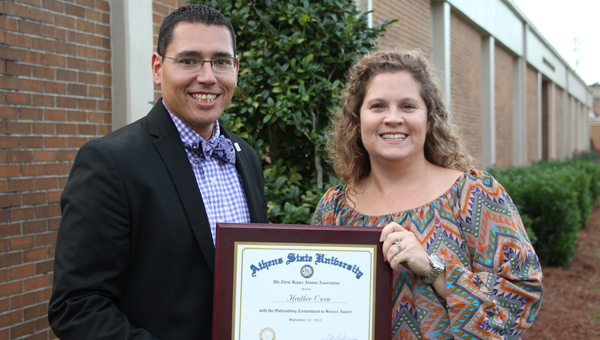 The award recognizes advisors who have shown exceptional service both in their chapters and in the Alabama region.

“Students are genuinely touched by your efforts to be involved in so many events, and your compassion for others,” was included in the letter Owen received with the award. “One student even stated, ‘Even though Ms. Owen wasn’t part of my chapter, I always saw her willing to help out at events. She also took care of me as if I was part of her family.’”

Owen said the award came as a total surprise.

“Being with, guiding and helping students is important to me and something I love doing,” she said. “I had no idea about this award until I received it, so I was very pleasantly surprised.”

Dean of Student Affairs Jason Jessie said Owen goes above and beyond working with students and he is proud other institutions recognize her level of commitment.

“Heather’s commitment to helping young people is exemplary. She doesn’t do it for the recognition, she does it simply because she cares,” said Jessie. “We couldn’t be more proud of her for this deserved recognition.”

Owen is an advisor for the Alpha Beta Chapter of Phi Theta Kappa international honor society, which includes students from the Andalusia and MacArthur campuses.

During her tenure as PTK advisor, Owen received all levels of advisor awards at the regional and international level. She received the Paragon Award for New Advisors in 2009-2010 reflective of her first year advising. In addition, she received the Distinguished Advisor Award in 2011-2012, and the Continued Excellence Advisor Award in 2013-2014. For eight consecutive years, the Alpha Beta Eta Chapter achieved a five-star level, the highest level recognized by Phi Theta Kappa.