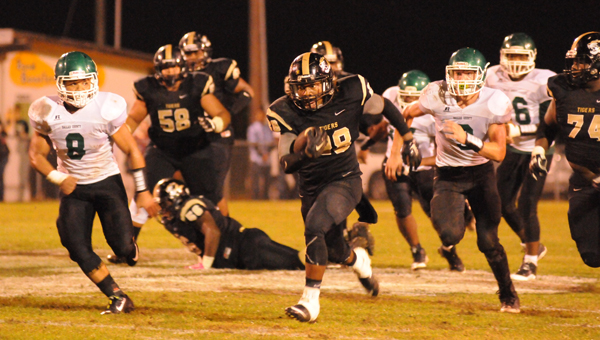 On a night when Greenville High School honored its 1955 state championship team, the Tigers moved one step closer to another title by defeating Dallas County High School 42-15 Thursday night at Tiger Stadium in the first round of the AHSAA playoffs.

“I was real proud of our guys,” first-year head coach Josh McLendon said. “They came out with a lot of intensity and took control of the game pretty early on. That was a good first step. You can’t take the next step until you take the first one.”

After a scoreless first quarter, Greenville (11-0) seized control of the game with a 20-point outburst in the second stanza.

The Tigers’ first score, a 1-yard run by senior running back Dequarius Peterson with 10:49 to play in the second quarter, was set up by a 24-yard strike from junior quarterback Brandon Simmons to senior wide receiver Skilar Moorer.

“We wanted to come out and throw the ball,” McLendon said. “We want to be balanced on offense, but we know that to advance in the playoffs we’re going to have to be able to throw the football. We did a pretty good job of that tonight, even with the wet field.”

Greenville pushed its lead to 13-0 when Peterson barreled his way into the end zone from 9 yards out at the 2:17 mark of the second quarter.

The Tigers’ final score of the first half came with just 49 seconds left to play. This time Simmons found senior wide receiver Ken McCoy for the 25-yard touchdown. Greenville led 20-0 at the break.

Greenville opened the second half with a 30-yard field goal by senior kicker Antonio Alvarez that was quickly followed up with a safety on the ensuing kickoff. After a Dallas County player mishandled the kick near the goal line, senior Jaquan Smith came flying in and made the stop in the end zone to give the Tigers a 25-0 advantage.

“It was a total team effort tonight,” McLendon said. “I thought we played well on offense, defense and special teams. We made plays in all three phases. It was just a good team win.”

Peterson scored his third touchdown of the night with 9:07 to play in the third quarter on a 5-yard run to extend the Tigers’ lead to 32-0.

After a fumble recovery by senior defensive end Marlon Davidson set Greenville up with first down at the Dallas County 22-yard line, the Tigers were forced to settle for a field goal — one of the few miscues for Greenville on the night.

With Greenville unable to reach the end zone, Alvarez booted a 35-yard field goal for a 35-0 Greenville lead.

The Tigers’ final score came on a 16-yard pass from Simmons to senior wide receiver Johnathan Powell with 11:53 to play in the contest.

With the win, the Tigers will advance to face  St. Paul’s in the second round. That contest will be played Friday at Tiger Stadium. Kickoff is set for 7 p.m.

As always, a long line of tractors from a number of decades of the 20th century were on display at... read more