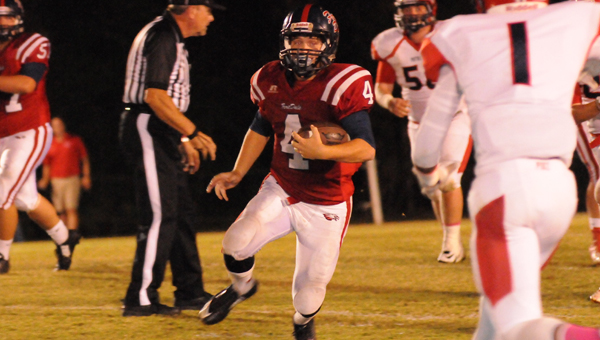 “I thought we played great defense,” he said. “I’d have to watch the film to be sure, but I think defensively that’s about as good as we can play.”

“We’ve got some young guys that don’t get to play a lot on Friday nights, but those guys do a great job of giving our defense looks at what the offense is going to be doing in the game, and that’s a big help,” Sampley said. “We wouldn’t have played as well as we did on defense tonight without them doing that.”

“I thought Pike had a great defensive game plan,” Sampley said. “We were just determined to run the ball. We really didn’t even try to throw it, but when we did we had some success.”

Taylor completed 9-of-12 passes for 91 yards and a score.

The touchdown pass came with 9:30 to play in the final quarter. After taking the snap, Taylor looked left. With no receiver open, he scrambled back to his right and found Gillem for a 34-yard touchdown. The score extended the Eagles’ lead to 14-0 following a successful two-point conversion run by Taylor.

“That was a big play,” Sampley said of the touchdown pass. “I felt like that was the turning point of the game.”

Taylor, who rushed for 46 yards on nine carries, got Fort Dale on the scoreboard with 18 seconds to play in the first half on a 5-yard scoring run. The extra-point attempt sailed wide and the Eagles carried a 6-0 lead into the intermission.

Fort Dale capped the scoring with 1:44 to play in the contest when junior running back Andrew Salter barreled his way into the end zone from 5 yards out. Gillem split the uprights to seal the Eagles’ 21-0 win.

Salter led the Fort Dale ground attack with 51 yards on 14 carries. The Eagles finished the game with 179 yards on the ground.

Fort Dale will be back in action next Friday when it plays host to the AISA’s top team in Edgewood Academy.